Illegal immigrants are good for the US economy

Gordon Hanson is causing quite a stir with his study for the Council on Foreign Relations entitled “The Economic Logic of Illegal Immigration”. (Press release, WSJ op-ed, abstract, paper.) Economically speaking, he concludes, there’s really very little reason to believe that legal immigration is preferable to illegal immigration — and illegal immigration has a small but positive net economic effect.

To the extent that the US spends a lot of money keeping illegal immigrants out of the country, that’s likely to damage the economy as a whole. Much better to deal with security concerns in other ways, such as licensing global temp agencies who could fill US jobs with employees from anywhere.

Of course, the chances of anybody in Congress taking up Hanson’s cry are slim to nonexistent — but with any luck his paper can help move the debate in the right direction. 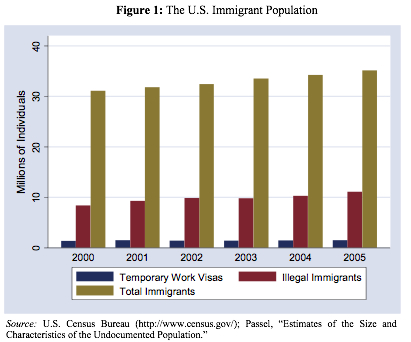 56 Responses to Illegal immigrants are good for the US economy