I hosted a wine contest last night. Thirteen people came, and each brought

two bottles of wine. We all tasted one of the bottles, while the other bottle

was put into a prize pool. (Hat tip to Gothamist

for the idea.) Every person scored every wine on a scale from 1 to 20, and then

the scores were aggregated. For this contest, we decided to taste red wines

a little too seriously, who recognised their own wines and gave them their highest

score just so that they would have a better chance of winning. Of course, neither

won. The full results, in Excel format, can be downloaded here.

If you plug the scores and prices into a correlation

calculator, you get a result of +0.61, which I have to admit is higher than

I thought it would be. Here’s a scatter chart so that you can see the results 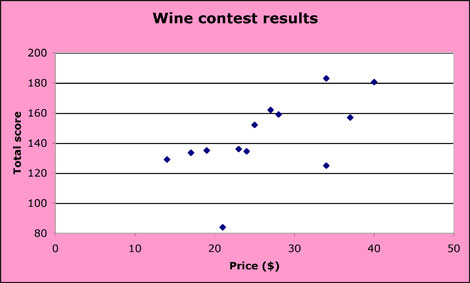 There was one wine which everybody hated – the Le Schmitou. Interestingly,

which came in at a much more respectable 9th place. The difference is where

difference, since the Languedoc was quite dark and bitter, while the wine from

the Vallée du Paradis, near the Spanish border, was far too sweet for

Beyond that, it seems that there was a large number of more-or-less average

To no one’s great surprise, the really overpriced wine – worse and more

expensive than most of the rest – came from California: the Robert Sinskey

The top two wines were both reasonably expensive. The winner was by far my

favourite wine of the lot (I gave it 17 points, while my second-favourite got

12), and I was happy to see Luke walk away with his choice of the prize pool.

That included my wine, the Caro, which I was very disappointed I didn’t rate

The party itself was a huge success, lots of fun, and we’ll definitely do it

again. But I did learn a couple of lessons. Firstly, when you’re tasting a lot

of wines in succession, on their own and not in the context of a meal, it’s

hard to really appreciate them all. Secondly, the wines which we were rating

average, and giving 10 points or so to, were all much more expensive than the

wines we normally drink, and we would probably love them in most everyday contexts.

So these results should probably not be taken too seriously. But I think I might

try and track down a couple of bottles of that Clos del Rey all the same.