Simon Dumenco is not a lazy columnist. But even the most avid columnist has

an off week, when he simply can’t think of anything to write about. The worst

column. The second-worst solution to this problem is the knee-jerk "X will

be killed by the internet" column, where X can be anything from TV news

to your neighborhood grocer. In Dumenco’s weak

Obviously, new media is not the most obvious candidate for giant-killer in

this particular case: Vogue and its ilk have only been getting fatter and fatter

of late, more or less in line with the extent of internet penetration among

the mag-reading demographic. But Dumenco sees disaster in his crystal ball:

But inevitably, fashion advertisers that prop up the glossies will, like

everyone else, increasingly migrate to Web and mobile interactive advertising.

And here’s why: Google’s emphasis on text-only ads notwithstanding,

and even streaming ads that actually don’t crash our Web browsers. (What

conceivable that say, Diesel could find the right combination of interactive

witty glossy ads, but would be more cost-effective and truly measurable in

a way that print will never be. (Diesel has already created one static ad

that appears only online, at ZooZoom.com.)

Can you just feel Dumenco desperately trying to hit his wordcount

here? There’s more extraneous verbiage in this paragraph than in an average

but also to distract from the fact that the substantive point he’s making is,

in fashion magazines: "The brands are the print ads, and vice

versa." But he misses the bigger picture. If someone is going to drop $10,000

on a Prada frock, it certainly helps if the Prada brand has been suitably pumped

up for her by print ads and by Prada presence in the editorial pages. But it

fabulous and valuable. And for that one needs the glossy magazines.

Individual fashion houses can drive demand for individual brands. But to drive

being published month in and month out, each reinforcing the others’ message

but they’re never about to create it. And no one knows that better than the

in which they advertise.

to get a consumer to buy a product. Perfume ads sell perfume, of course, but

selling fashion. The key is to get the brand buzzing among the people who matter

– editors high up on magazines’ mastheads, and maybe a handful of department-store

buyers. After them, it helps if various fashion-industry insiders get it too.

So you use trendy and expensive models, buy enormous swathes of Italian Vogue,

and generally ignore the end consumer. Why do you think that there are so many

if it’s read by the right people, can have much the same practical effect as

an ad in a major Condé Nast glossy. And secondly, these magazines more

or less give their ad pages away to major advertisers, because the mere presence

of a big name on the back cover can give the magazine buzz and legitimacy. Eventually,

the magazine can grow up into an Another Magazine or Zing: small by Condé

standards, but still successful enough to sustain itself.

But websites don’t work like that. For one thing, fashionistas are notoriously

computer-illiterate. If you want to reach them, you have to stick to print.

and power of a print ad. Dumenco’s ZooZoom example actually works against him

if you try to find the ad he’s talking about: the website is horribly designed,

almost impossible to navigate, resizes your browser window, and has no permalinks.

Even if a fashionista did see an ad or an editorial shoot they liked, they would

find it impossible to send that story to a colleague. And there’s certainly

no easy way of ripping an image out and putting it in a clipping book somewhere. 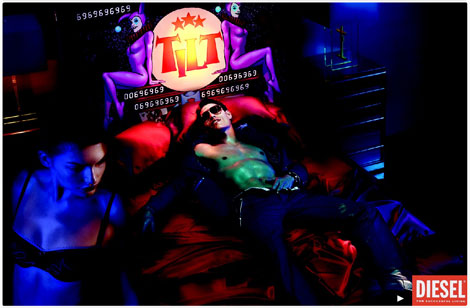 Just look at the Diesel ad that Dumenco’s talking about: the reason it appears

only online is that it’s crap. In fact, the only interesting thing about is

that it’s online. So long as fashion advertisers’ idea of an online ad is basically

taking a print ad, scanning it, and putting it on the web, online fasion advertising

will continue to be irrelevant. And I don’t know about you, but I’m not "increasingly

they for fashion products or anything else. In fact, I can comfortably say that

I’ve never seen a Flash-animated ad which was "incredibly cool".

Dumenco finishes by bringing up the evil spectre of Lucky, the shopping mag.

Apparently it has, ahem, "set the entire industry up for a fall by converting

the formerly immersive magazine-reading experience into a distracted browse

that’s just begging for transactionality." In other words, Lucky

readers are looking for shopping ideas, and it’s easier to shop from a website

than it is to shop from a magazine.

Well, maybe, if and when a website ever manages to come up with a browsing

experience as navigable and pleasurable as flicking through a magazine. Remember

design a website which can do the same thing. But in any case, Vogue is not

Lucky without the transactionality. Vogue sells millions of copies. Its readers

are not women who want to know what $10,000 frock to buy, but rather women who

that its readers all buy $10,000 frocks. Lucky isn’t a glossy fashion mag; Vogue

is. And high-end fashion advertisers will continue to support it because it

supports them. And because a double-page spread in Vogue is a very seductive

thing. Much more seductive than any mobisode.

2 Responses to Long live the glossies