Did the world really need yet another mutual-fund gimmick? The Liberty Investment

Group seems to think so: it’s launched something called the Index

of Economic Freedom Portfolio to no little acclaim. Here’s Mark

a startling conclusion: Over the past 11 years, the Economic Freedom Portfolio

has far outperformed world stocks in general. While the MSCI World Stock Index

rose 140% during this time, and the Emerging Markets Index climbed 85%, the

IEFP rose an astonishing 254%. See the graph below. 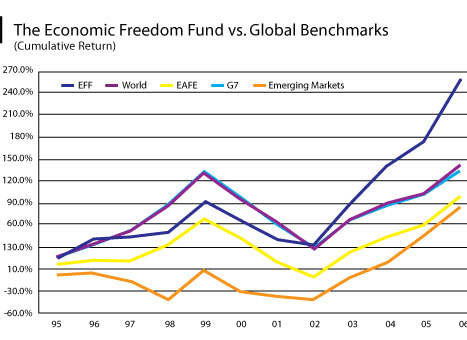 I have no idea where this chart came from, but it makes no sense to me. There

I tried to look at the fund’s prospectus

for insight as to how this chart was calculated, and came up with nothing. Skousen

The Index of Economic Freedom Portfolio (IEFP) is updated each year, according

to the Heritage/WSJ annual index.

Not true. The fund for sale now is the "Index of Economic Freedom Portfolio,

in 2007. The Portfolio never gets updated: if a country falls out of the index,

its stocks stay in the fund, and if a country makes it into the index, its stocks

will never make it into the fund. If you wanted to track the index, you would

And I have no idea what this means, from Skousen:

In 1995, the IEFP consisted of only 6 countries. Now there are 17 countries

in the portfolio. Clearly, economic freedom has been expanding around the

There might be 17 countries in the portfolio, but there are no fewer than 30

"free or mostly free" by the Heritage Foundation index. And it’s not

the top 17 countries which make the cut, either. Estonia, for instance, comes

So when the fund managers created their pretty chart, did they take returns

from the IEFP, which started off with 6 countries and now has 17? Because if

they did then they’re charting returns from a dynamic portfolio of stocks, which

On the other hand, did they just take the 17 securities in the 2007 series,

and see how they’ve performed over the past 11 years? That wouldn’t be much

of an indication of anything, and it’s probably not surprising that the fund

did well over the past 11 years, since the Finland chunk is invested 100% in

Amazingly, both stocks have done very well over the past 11 years: what a coincidence!

Hilariously, they’ve even decided that in order to represent Luxembourg in

their fund, they’re going to invest 100% in Tenaris, which is really more of

an Argentine company than a Luxembourgish one. In any case, Tenaris is a very

multinational company, dependent wholly on the oil industry, which has done

very well in recent years (of course), but which has almost no connection to

The Index of Economic Freedom Portfolio is a joke, and I sincerely hope that

"Investment U". If you really want to bet on the Heritage Foundation

where there are ETFs based on their stock markets. I’ll even give you the ticker

(UK). New Zealand and Ireland are too small to worry about. There – I’ve