Are we genetically capitalist?

Clark, who has an interesting thesis – that world economic history

violent were the most reproductively successful, to a capitalist world where

the richest were the most reproductively successful. Here’s the chart: 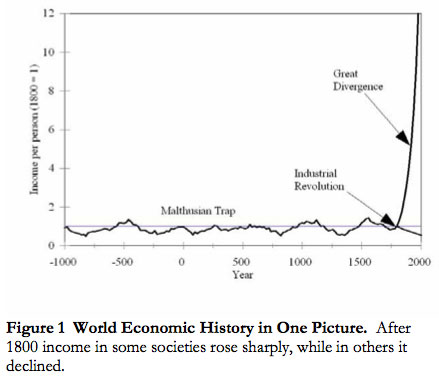 Cowen’s problem is that Clark hasn’t explained a particular advantage for England,

where the industrial revolution was born, over the rest of Europe. But I don’t

see this as a problem. I see Clark’s thesis as explaining the economic history

of all of Europe, not as trying to explain why England’s growth rate took off

I’m quite convinced by Clark, actually, because his thesis fits neatly into

that of Dan Gilbert, of

and to believe that making more money will make us happier. And maybe the real

hope for a country like Bhutan, which seeks to maximize "gross national

happiness" rather than GDP, is that its population doesn’t have the same

in the search for wealth.

4 Responses to Are we genetically capitalist?