So there’s tons of news about Apple’s

battery recall, which involves Apple replacing either 1.1 million or 1.8

million Sony batteries. Obviously the source for all this news is Apple itself.

But there’s nothing on the apple homepage,

nothing on the news page, nothing

on the press release page – nothing

at all anywhere, as far as I can see, explaining exactly which batteries are

affected or what owners of Apple laptops should do. One would think that Apple

website as soon as the press release went out – or, at the very least,

would be able to put the press release up on the website.

In fact, how did all the news organisations get this information?

Was it by email?

UPDATE: It seems the news came

from the US Consumer Product Safety Commission. There also may or may not

be a recall page at http://support.apple.com/batteryprogram,

but I just get an error message when I try to go there.

UPDATE 2: Guess what? My PowerBook battery has been recalled!

UPDATE 3: I found the link on apple.com! You click on the

"support" page, and it’s buried in the right-hand column. Thing is,

if you try to click on it, it doesn’t work… that page is down. So I phoned

the number on the CPSC page, and the friendly Apple person told me that:

In other words, chaos. Not the kind of user experience one expects from Apple.

In any case, after the jump, a screenshot of where that link is buried.

is up! But when I input my battery’s serial number, I’m told that this "serial

number didn’t validate". Back to the phone… at which point, after almost

an hour on hold, I’m told that this is a known issue and that they (on the phone)

can get around it. My new battery is on its way! But the whole process was much,

much harder than it should have been. 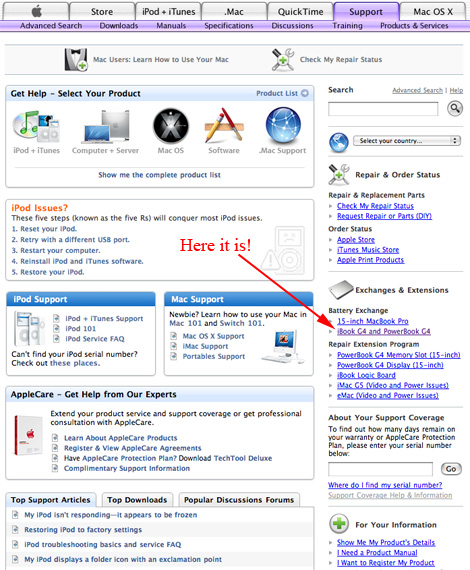 6 Responses to The Apple recall