The BBC and Brutalism

Amy Lawday sends me a rather

about Brutalism on the BBC’s website. The story comes in the wake of the first

listing of a Brutalist

If it is agreed by a large majority that a building is dog ugly, and depressing,

then why save it?

I agree. I opposed the

preservation of 2 Columbus Circle for much the same reason:

Preserving great buildings, and even merely good buildings, is one thing.

But preserving provocative buildings is another thing entirely.

The fact is, the kind of people who love From Bauhaus to Our House are

hideous eyesore. This building is one of the few things on which both die-hard

On the other hand, not all Brutalism is dog-ugly and depressing. The National

Theatre, for instance, to take only the most obvious example, is a wonderful

building and should be preserved. The Old Vic Annexe is not a wonderful building, 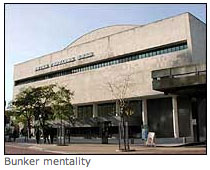 Yes folks, the editors at the BBC decided to illustrate an article about Brutalism

with an illustration of the Royal Festival Hall, one of the greatest post-war

buildings in the UK, and possibly my favourite building in London. I’m far from

alone in this: go there any day of the year, but especially in the summer, and

you’ll find both the interior and exterior spaces thrumming with life. The foyers,

buildings in the city.

What’s more, the RFH is not Brutalist at all. For one thing it was built for

the Festival of Britain in 1951, so it’s far too early to be Brutalist. For

another thing, it’s not a big concrete slab: as this

The brutalist approach of Modernists like the Smithsons and Erno Goldfinger

But even BBC journalists, it seems, are so architecturally illiterate that

it’s made of concrete decide that it represents a "bunker mentality".

I hope that Ed Dorrell, the editor of the Architects’ Journal and the author

of the BBC article, gives them a suitable amount of grief.

13 Responses to The BBC and Brutalism