Back at Halley, briefly (we hope!)

– one of October 15/16th and the next, which I just received today, from

the 23rd. I hope you received the flowers in place of my usual letters.

base this afternoon on our way to our second campsite of the holiday. Simon,

Craig, Ed and I left for the "MacDonald Ice Rumples" on Sunday afternoon

if you would get any letters from me this week. We had a fantastic time at the

Rumples – what an amazing place.

As you know, everything around Halley is flat, flat, flat except for a few

features you can see on the horizon. One of these is the Rumples and since they’re

the only thing you can see, I thought they would be huge. As it turns out, it’s

pretty impressive but just lots of lumpy bumpy upturned icebergs, not much higher

than the ice-shelf itself. And only an hour skidoo ride away! Apparently this

and grounds the moving ice shelf that we live on. The result is all sorts of

chaos and the nice smooth ice breaking up and forming creeks… it is, in fact,

the reason why we can access the base by ship every year. 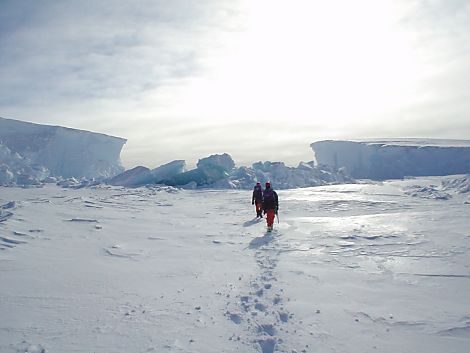 Anyway, what you actually see is delightful, to my eyes anyway. Lots of ice,

grounded icebergs frozen in around us… very exciting, you can almost see the

ground moving around you (very slowly!) We even saw some footsteps that colleagues

had moved (so we turned around at that point instead of jumping!) Here’s a picture: 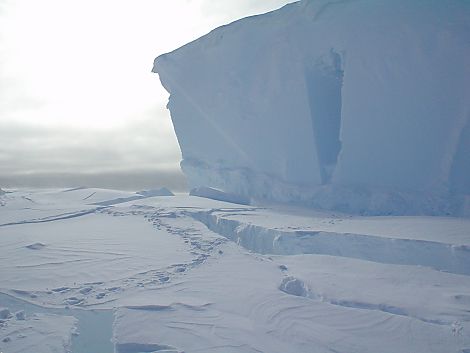 confidence camping in the antarctic, putting up and taking down tents, abseiling,

walking in crevassed ice fields… when you know how, it doesn’t feel very scary

Anyway, last night we decided to make the most of our 10 days off and head

for the Hinge Zone today if the weather was good. That’s the place I went in

March but didn’t see anything because the weather was so bad. After about an

hour of driving, we stopped to check everyone was ok and discovered that (1)

bad frostnip on his neck. We were still fairly close to base so we decided to

come home, have a cup of tea and re-assess here after having warmed up. Hence

this opportunity to email!

so everyone is in a celebratory mood. I think we’ll spend the night here tonight

and then try to move on somewhere tomorrow. If the weather’s too bad to go to

the Hinge Zone (about 4-5 hours driving), then we might just go to the caboose

on the coast and visit the penguins again. There are apparently even more now

than at my last visit! So whatever we do, I know we’ll have a good time. It

to see it. Never mind if not – I have after all seen lots here and had

On other news, we are apparently due to have three or four flights in the next

month, which is a bit weird. One private plane will be flying between Rothera

a few days later and possibly then a third time, we don’t really know for sure

though. After that come the Germans on their way to Neumayer – I met them

the last two years and they’re always fun to have around for a few days. I don’t

with the weather here as you’ve probably gathered by now!

Then, finally, in December we might get visitors from our own institution along

again, we’ve been told not to count on it!) There will be a couple more flights

in December carrying new faces (one lot coming in via Cape Town, the South African

base and then the German base… lucky sods!) The real chaos of course starts

be the third time I’ll be documenting that time of year! It really must be time

The sun is now almost permanently up, I’m not really sure because we’ve had

so much cloud cover lately. It’s certainly light outside the whole time.. makes

and ease of getting anything done. On my last camping trip I remember my face

getting so cold, goggles steaming up, fingers feeling sore after a few minutes

was hindered by either cold or darkness. Plus, of course, it’s much nicer sleeping

when you’re warm even if it’s light!

So, I’m coming around to the advantages of warmth and light though wouldn’t

have missed the winter for the world.. it’s still nice to know that Scorpio

is up there even if I can’t see him!

probably repeat to Felix to put on his webpage. If you don’t mind, I’ll send

here (weekly letters to Granny are actually big events for me!).

I’ll write with more news as soon as I get back from wherever I’m going!

lots and lots of love 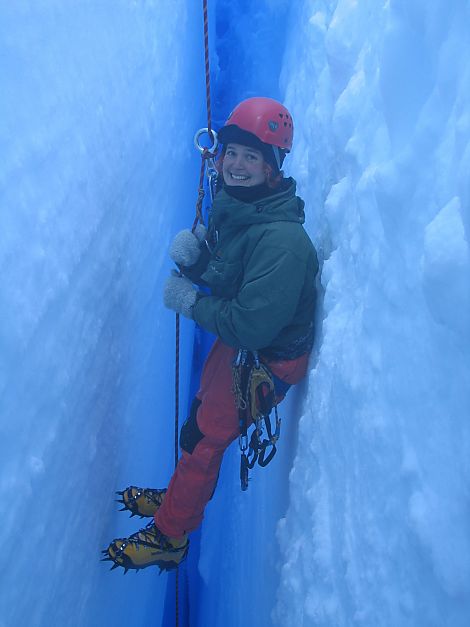 2 Responses to Back at Halley, briefly (we hope!)