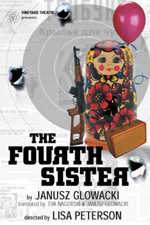 the weekend, I went to see a fantastic new play, which is running

at the Vineyard Theatre on 15th Street: The Fourth Sister, by Janusz

Glowacki. Full disclosure: I’m a friend of the translator, Eva Nagorski, and

I went to a preview, since the official opening isn’t until November 21. So

consider this advance buzz, rather than any kind of official review. But I enjoyed

the play so much I had to write about it.

The play is set in Moscow, in "the present", by which Glowacki means

not some vague idea of post-Communist Russia, but rather a very specific place

and time, with references to Chechnya and George W Bush. It opens with an old

babushka (is there any other kind?) complaining about the fact that she’s being

walk-up. The amount is shocking not only for its size, but also because we’re

used, in the theatre, to shocked reactions to sums which today would be laughably

small. Five pounds! Fifty kopecks! An amount which is actually shocking to us

makes us sit up and take notice. I don’t know whether this play is going to

become obsolete in the future, or whether it’s meant

to, but the fact that it’s so focused on the actual world as it is today,

specifics and all, is refreshing.

to the writing. Scenes rush straight into other scenes, with hours or even days

elided as though they simply didn’t exist. Tania (Alicia Goranson), who is the

centre of the first half of the play, speaks in a beautifully-captured early-adolescent

stream of consciousness, full of strange and wonderful jumps from astonishing

solipsism to penetrating psychological insight. She’s the youngest of three

sisters, all of whom yearn for a romantic ideal we know they will never achieve.

But we’ve come a long way from Chekhov: the buttoned-up manners of Russian country

Much of the comedy in this play is broad, in a crazy, exaggerated sort of way.

When the gangsters kill the wrong man, they apologise to his mother and make

over-the-top amends. A film of a blatant deception wins an Oscar for Best Documentary.

A lot of people lose limbs, one of them the manager of a circus, whose leg is

eaten by a starved tiger called Pepsi. (Another of the sisters has been taking

half of Pepsi’s meat home, to feed her family.) These are the sort of things

Rushdie, but they work just as well on stage.

If one author springs to mind more than anybody else, however, it’s probably

Zadie Smith, another talent who uses her out-of-control imagination to illuminate

lower-middle-class life. And just like White Teeth, The Fourth

Sister rocks about so joyfully that it pretty much collapses at the end.

On the way there, though, there’s a great deal of fun, interwoven with drama

and tragedy. I don’t want to give away too much of the plot, since the twists

are delicious, but suffice to say that it includes defenestration, cross-dressing,

drug deals with warlords, and a newborn baby toting a kalashnikov. (And if that

sounds like it comes straight from a film script by Quentin Tarantino, don’t

worry, Glowacki and the director, Lisa Peterson, are one step ahead of you on

The acting is excellent, especially from the supporting cast. Rarely will anybody

have relished playing Ganster No. 2 quite as much as in this play, and in return

for some great writing, Glowacki gets some great performances. Goranson is particularly

good in a very difficult role. (And I don’t particularly want to say this, but

if I don’t, you’ll spend half of the beginning of the play wondering why she

looks so familiar: she was Becky in Roseanne. Don’t let that

Ultimately, however, the play is Glowacki’s triumph. Peterson keeps it moving

at a cracking pace, and Nagorski has done a great job, with Glowacki’s help,

in preserving the individuality of the voices. But it is Glowacki who has managed

to take an important and depressing subject, and turn it into a grand and dark

9 Responses to The Fourth Sister