have just published a fine book

on what happens to old dice (they start cracking up, quite literally, and quite

beautifully), and Bill Morrison has made a film,

called Decasia, made up entirely

of old footage which is now falling apart. Both of these were on display last

night at the Angel Orensanz Center on Norfolk Street.

book is a pretty diversion, the sort of thing which will probably mostly be

for a hardback, albeit one of only 64 pages.) The film, on the other hand, is

much more ambitious. It’s Morrison’s first feature: up until now, he’s made

short art films which get shown at the likes of MoMA

Decasia started life as a visual accompaniment to the premiere of

a symphony by Michael Gordon. Last night, however, the symphony was reduced

to a soundtrack, and the film itself was the center of attention. It’s structured,

in Morrison’s words, "like an onion": the further towards the beginning

of the film a certain piece of footage appears, the further towards the end

more footage from the same sequence is likely to reappear. All of the footage

has been slowed down, so that you see each frame two or three times, in order

to make the decay visible to the eye. 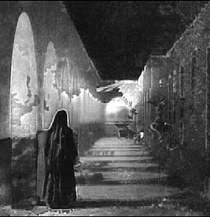 doesn’t take long to get the general idea. At the beginning, the eye is naturally

caught up by the scratches, abrasions and other signs of dying celluloid, but

Celluloid does not decay in any kind of predictable way. Sometimes it gently

warps, so that it looks as though we’re viewing the original image through a

veil of water, with drops falling down on to it at various points. Sometimes

the film is completely scratched out in the middle or at the edges. Sometimes

black becomes white and white becomes black, and the image looks irised, with

edges emphasised and subtle shades of grey eliminated. (The final film is in

black and white, although some of the original footage had colour in it.)

Most startling are the times when faces get stretched, as though they were

rubber, in a manner very similar to what happens if you scratch around on a

still-wet Polaroid with the cap of a ballpoint pen. A friendly judge can suddenly

become an horrific death’s-head mask, and then go back to normal a couple of

frames later. The fact that the change is pure happenstance only adds to the

feeling that we suddenly got a glimpse of ugly reality below the surface. 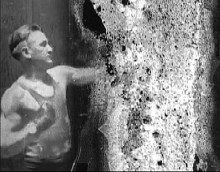 Other sequences linger in the memory: a crocodile of children, for instance,

walking slowly towards the camera under a lowering black sky, overseen by a

shadowy pair of nuns who have been transformed into ghoulish sentinels. Or a

boxer, attacking something unseen in the middle of the frame, as though he’s

battling for the victory of something over nothing.

Two sequences form the centerpiece of the film, however. The first is a very

by celluloid decay, being born by Caesarean section. The second, which is far

of parachutists who then descend slowly to the ground. It’s at this point that

symphony, as opposed to the composer working with him. The music forms an extended

climax, and so what we see must be extended as well.

At other points, however, the music is a saving grace: it gives the audience

something to hold on to, and gives the dialogue-free film something other than

a wholly abstract structure. The film is already too long, at 70 minutes; it

would be completely unwatchable without music. The dark and looming symphony

also gives the film its low center of gravity, as it were: makes the audience

ponder questions about the connection between growing and decaying, rather than,

say, thinking about the mildew on the inside of their shower curtain.

I do have a couple of questions about the influences on Decasia. The

title (and the New York Times) seem to posit a link to Fantasia,

which I don’t see at all. Fantasia is one of the greatest films ever

made, and I’d hate to think that anybody setting images to music thinks that

they’re working in the same tradition. I think a much more obvious influence

Peter Greenaway’s meditation on the beauty of decay. But in a way, the films

got made in the wrong order: there’s so much more to the Greenaway than there

is to watching old rotting newsreel. (And Michael Nyman is a better composer

The difference, of course, is that the films come from very different traditions:

Greenaway from making movies for theatrical release, and Morrison from making

artworks using the medium of film. And while Greenaway is big on constructing

his own art installations, and Morrison showed Decasia at Sundance,

the gap still remains. Art films are always too long, and artists working in

film always slow down their films too much. If someone has paid a couple of

hundred thousand dollars for a film, they’re not likely to feel impatient while

watching it. If someone has paid ten dollars to go see a film, on the other

hand, they expect to be entertained. And no one really expects anything to happen

in an art film, for better or for worse.

If you’re interested in seeing Decasia, by the way, it’s going to

be on the Sundance Channel towards the end of the year.

This entry was posted in Film. Bookmark the permalink.