Chart of the day, Apple vs Microsoft edition 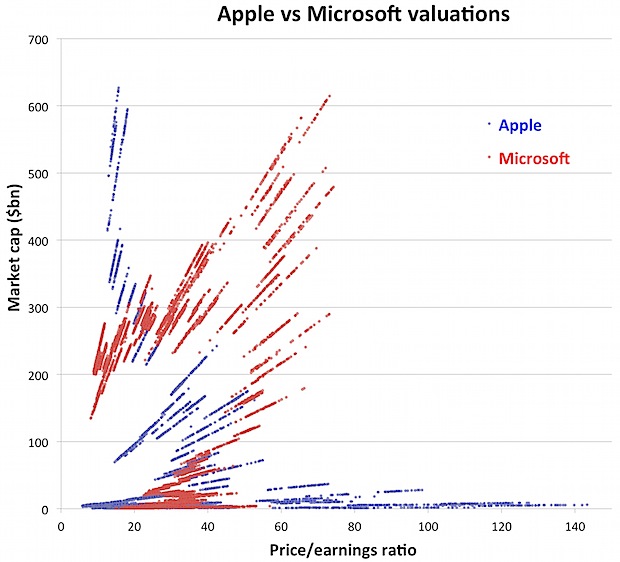 Many thanks to Ben Walsh and the Thomson Reuters data team for helping put this chart together. There’s a lot of data here, which isn’t easy to obtain: some 15,000 datapoints in all, going back as far as 1983.

The chart was inspired by this post by Nick Wingfield — the point at which Apple’s market capitalization, in nominal terms, finally exceeded the previous all-time high, which was set by Microsoft in 1999. So we went back and took the closing share price of AAPL and MSFT for every day since they went public, and plotted the market cap against the p/e ratio every day. Apple’s closing prices are in blue; Microsoft’s are in red.

Apple too has traded at whopping great multiples in the past — just look at that long tail of blue dots hugging the x-axis. (In fact, for the sake of clarity I truncated that axis a bit, since it goes on a lot further out than that.) But if you bought AAPL stock at a p/e of 373 you’d look pretty smart right now: the shares have gone up almost 100 times since then. Whereas, if you bought MSFT stock at a p/e of 73, you would just have ended up losing a lot of money.

What this says to me is that the market in Apple shares looks a lot more rational than the market in Microsoft shares. Investors will pay huge multiples for Apple shares when the company looks cheap, but not when the company looks expensive. When Apple breaks the half-trillion barrier, that’s despite the fact that its p/e ratio is low; when Microsoft breaks that barrier, it’s because its p/e ratio is high.

So when Wingfield talks about “investor euphoria” surrounding Apple, bear in mind that the euphoria he’s talking about is very different from the kind of euphoria we saw at the height of the dot-com bubble. Apple is indeed worth a truly enormous amount of money. But investors don’t see the kind of scalability in Apple, circa 2012, that they saw in Microsoft circa 1999. Despite the fact that the global market for smartphones today is vastly greater, and growing much faster, than the global market for Windows software was in 1999.

Update: I’ve put the data here for those who want to play around with it themselves.

28 Responses to Chart of the day, Apple vs Microsoft edition