Back in 2005, I put up a blog entry entitled “Pedestrianize Broadway!” in which I waxed rhapsodic about Broadway being made a pedestrian thoroughfare at least from Columbus Circle down to Union Square.

Now it seems there’s a non-zero chance that my dream will come true and that the current plan to close off small chunks of the Great White Way is only the beginning:

If the Broadway plan does succeed, the next step (though Sadik-Khan is not talking this way publicly) will likely be to close more sections of Broadway until one day in the near future the entire boulevard has been converted to pedestrianized open space. It’s hard to characterize how dramatic a change that would be. Imagine a Manhattan with two major parks: one built in the nineteenth century as a confined space of bucolic wonder; the other refashioned in the 21st century as a long, open boulevard slicing the island on the diagonal. This would be the most striking alteration of the city’s physical landscape since the days of Robert Moses.

Oh, to see it happen!

Update: This is what it looks like, now, when there’s a street fair on Seventh Avenue: 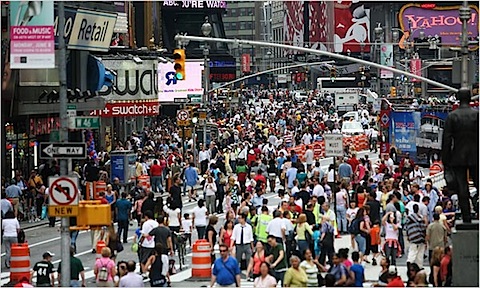