Only twice have I seen lots of American flags on the streets of downtown New York. Once was after 9/11; the other time was last night, after the election of Barack Obama. An impromptu midnight street party sprang up on St Mark’s Place, between 1st Avenue and Avenue A; one apartment put some speakers out on their fire escape and started pumping out Queen, Kanye, Biggie Smalls, and other crowd-pleasers. And the ecstatic throng below would scream and chant: “Yes We Can!” “O-ba-ma!” “U. S. A.!” At one point they even sang the national anthem. The cops were sensible, and let the party run until about 2:30am, blocking off the block to traffic and doing little more than keeping a careful eye on things.

I’d known in advance that Obama would win — and when Pennsylvania and Ohio both went Democratic, the result was a foregone conclusion. But the emotion we all felt on seeing him officially declared president-elect — that was something else entirely. There were quite a few tears shed; the vision of Obama and Biden on stage, with the old white guy being the sidekick and the young black guy being the president-elect, was indelible.

So last night was great, but this morning is horrible, couldn’t we have just a few days at least to savor the victory? I’m hugely disappointed in California; the result on Prop 8 goes to show that this country has a very long way to go, beyond electing a black president, before it can truly say that all its citizens are equal.

A couple of pictures from St Mark’s Place last night: 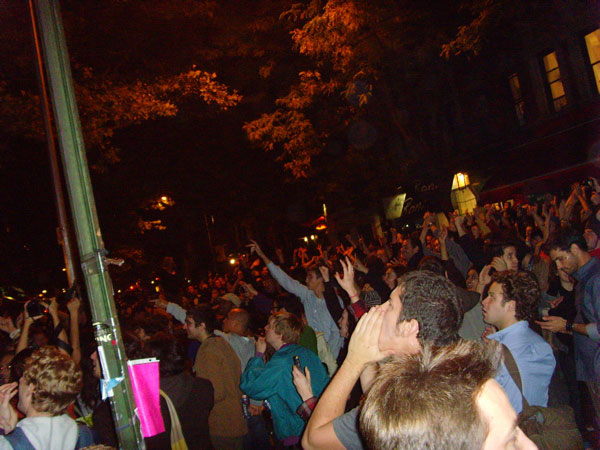 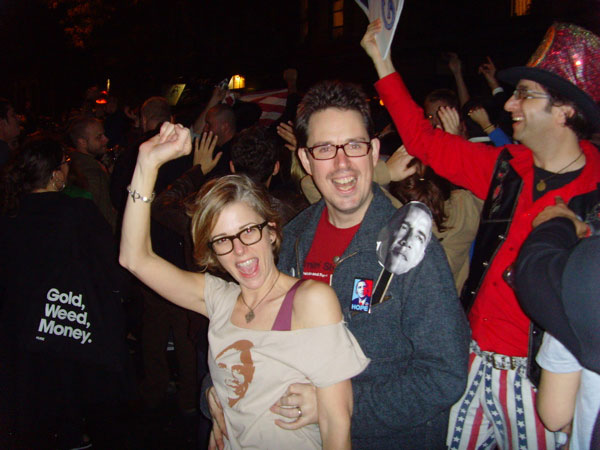