A Masterpiece from Murakami 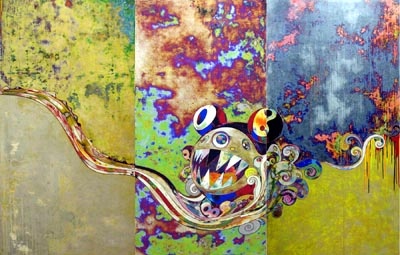 I went to the Takashi Murakami show at the Brooklyn Museum last night, it’s well worth seeing. For me, the highlight is the painting above, 727-727, which unfortunately just doesn’t work very well in reproduction. In real life, it’s enormous — each of the three panels is 3 meters high (that’s 9’10”, for Americans).

Now Murakami has been painting (or getting his assistants to paint) very large paintings for a very long time, and many of his installations are significantly bigger than this: the scale of this piece is nothing new. But often the size of Murakami’s pieces works only to overwhelm, to bludgeon the viewer with sensory overload. In this case, Murakami creates a complex and stunningly beautiful ground of worked and reworked paint: he mounts his canvas on board, puts on a layer of acrylic paint, sands it down until there’s almost nothing left, puts on another layer, sands that down, and so on and so forth until the end result ends up looking like a cross between a Gerhard Richter squeegee work and an Andy Warhol oxidation painting.

The result isn’t incoherent from afar, as some Murakami paintings can be; instead, it’s one of those paintings which works perfectly at any distance from far across the room all the way up to right against the astonishing surface of the canvas.

The content of the painting could easily fill a very large catalogue essay, from the DOB mascot to the flattened and stylized wave forms and the carefully-applied drips at the right-hand edge: intellectually, this is a very complex work. But it also marks the point at which Murakami starts becoming a bit less conceptualist and more of a pure painter: the colors are gorgeous, the formal structure is extremely strong, and there’s a pitch-perfect interplay between the flattened areas of abstract color and the more representational elements. In short, I feel comfortable calling this a 21st Century masterpiece, maybe the first I’ve seen. And frankly I’m a little annoyed it’s wound up in the collection of Stevie Cohen; I hope and trust he’ll be lending it out a lot, since it really deserves to be on more or less permanent public view.

14 Responses to A Masterpiece from Murakami