How convincing is Roubini’s argument that the housing recession will only get worse?

Nouriel Roubini today blogs his new paper which argues that the US housing recession is far from bottoming out. In truth, however, the paper is really just a longer-than-usual blog: it generally asserts at least as much as it argues, and is written more colloquially than formally. Not that there’s anything wrong with that.

There are basically two parts to the paper, which attempts to try to work out how much longer the current housing recession will continue. The first takes a basically chartist approach, looking at previous housing recessions and assuming that the present one will be similar. The second takes more of a supply-and-demand approach.

The problem is that a chartist approach is never particularly convincing, and certainly not in this case, where the charts themselves seem to disprove any attempt to demonstrate that the housing market has remotely predictable cycles. And the supply-and-demand approach has two big problems: it doesn’t explain housing-market movements in the past, and it basically assumes its own conclusions.

It’s also worth noting that nowhere in the paper does Roubini talk about housing prices, as opposed to housing construction. His definition of a housing recession is nowhere made explicit, but seems to be based on housing starts, and is certainly not based on house prices. So even if he’s right about the future of the housing recession, that doesn’t necessarily mean that prices will go down.

A few specifics, for those who care. First, his main chart: 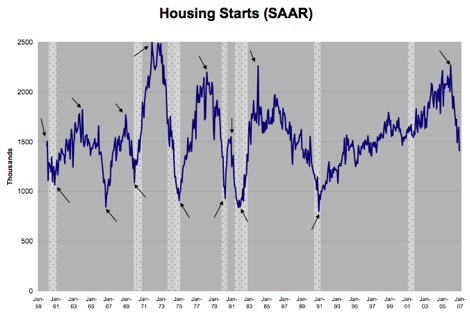 A large amount of Roubini’s analysis comes from looking at this chart and performing all manner of inductive feats on it. He looks at the size of the drops between arrows, the amount of time elapsed between them, and so forth, and then makes predictions as to the position of the next up arrow based on those old datapoints.

Is all this of any use to anybody? If you’d tried that technique with the last housing recession, which lasted 84 months by Roubini’s calculation, you’d have been well off base: the average of the previous six housing recessions was just 23.5 months. And you’d have been even more off base if you’d tried to predict the length of the last housing upturn, based on the length of previous housing upturns.

It does seem to me that Roubini is looking at an extremely noisy series and trying desperately to find patterns in that noise which simply don’t exist. I mean, just look at that chart. Does it really strike you as the kind of thing from which any useful prediction can be extracted? A nice pretty sine wave it is not.

Nevertheless, Roubini is so bought in to the concept of housing-market cycles that he writes things like this, without any empirical support:

To be fair, I have no idea how one would even start trying to demonstrate that a given series was a “crucial driver” of any economic “cycle”. But whenever one reads a sentence like that, it’s worth remembering that it comes entirely from the world of economic theory, as opposed to the world of empirical fact.

After all the cycle-based stuff, it’s refreshing to get some real supply figures in the second half of the paper. After all, economic luddite though I am, I will concede that prices tend to go up when demand exceeds supply, and that they tend to go down when supply exceeds demand.

The problem is that although Roubini has supply figures dating back to 1968, he doesn’t really have any kind of data series at all on the demand side. So all of his calculations are based on demand increasing steadily with population growth: he makes no allowances, for instance, for shrinking family size. And although he’s happy projecting both supply and demand forward until 2010, he never stops to ask whether his model can explain the developments we’ve already seen in the housing market. After all, if the housing market hasn’t been following his rules of supply and demand for the past few decades, then there’s no particular reason it should start now. And all those crazy spikes in the housing-starts chart don’t look to me as though they were perfectly predictable reactions to changes in supply and demand. Or, to put it another way, the changes in supply and — especially — demand which caused those crazy spikes are hardly the kind of changes which Roubini is modelling in this paper.

It also seems to me that all of Roubini’s models assume what he’s purporting to conclude: that various data series, such as the stock of housing inventories, will revert to mean over the next four years. Again, this is chartism, and I see no reason at all to consider that assumption a reasonable one. And while Roubini’s predictions for supply in the housing market seem perfectly reasonable to me, I’m not at all convinced about his predictions with respect to demand. With prices stagnant and rents rising, it’s making increasing amounts of economic sense to buy rather than rent — and even to buy for rental income. Add to that the effects of mortgage-interest tax deductibility, and the effects of a weakening dollar on demand from overseas, and I think it’s quite easy to paint a scenario with rising, rather than falling, demand.

I should say that it’s entirely possible that Roubini is right, and that both housing starts and housing prices are going to fall substantially over the next couple of years. I certainly don’t have any privileged information on the subject. But he doesn’t either. And I’m no more convinced that the sky is falling now than I was before I read his paper.

15 Responses to How convincing is Roubini’s argument that the housing recession will only get worse?