The correlation between corruption and wealth

Doug Muir is a

it actually came out back in November.

But he is good at getting people to create pretty charts for him, like this 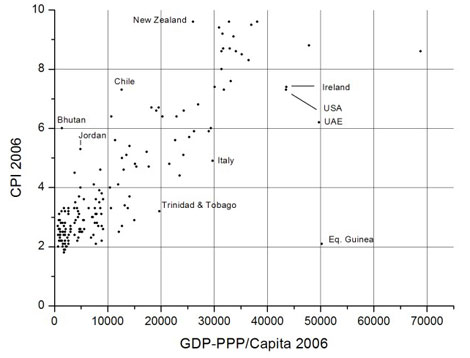 The chart has the corruption perceptions index on the y-axis, and PPP GDP per

capita on the x-axis. As you might expect, countries with lots of oil (Trinidad,

Equatorial Guinea, UAE) tend to be more corrupt than you might expect from their

wealth alone. And I’m sure that it comes as no surprise that Bhutan, Chile,

and New Zealand are the countries which outperform.

More interesting, however, as Muir’s commenter Cyrus points out, is the fact

corruption of about 7/10. After that level, the correlation seems to break down

Diminishing returns to honesty? Or are people naturally somewhat dishonest,

3 Responses to The correlation between corruption and wealth