a 145-page report (out of its London office, natch) entitled "The Business

of Climate Change". It’s a very solid book, with excellent analysis of

the facts as we know them, the prospects for how climate change might be mitigated,

and the role of both governments and the private sector going forwads.

Of course, it also looks for investment opportunities related to climate change:

although the downside is big, that doesn’t mean there aren’t companies who might

be able to position themselves to benefit from it, such as Renault, GE, Siemens,

uranium miners, and healthcare companies who can benefit from an increase in

respiratory diseases, such as GSK and AstraZeneca. The big picture, however,

is pretty gloomy: climate change is definitely bad for markets, it would seem.

Here’s one interesting chart from the report, showing developments in the EU 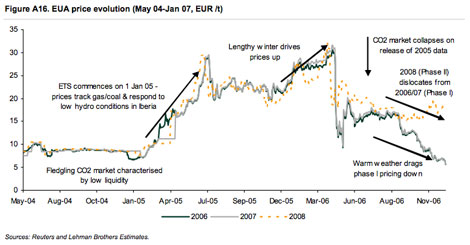