in the Phi Delta Kappan saying that after controlling for student background,

mathematics achievement in public schools is actualy higher than that

in private schools. It’s a striking finding: as the authors note,

The study focused solely on student achievement in mathematics — a subject

by institutional effects than other school subjects such as literacy.

In other words, if this is true for mathematics, it’s likely to be even more

true for other subjects.

The study went all but unnoticed: Google shows

the grand total of four web pages linking to it. I only found it because one

year later, the Atlantic found 127 words for it in its "Primary Sources"

This is a question I’ve been interested in for a while. In fact, last year,

when I was reviewing Freakonomics,

I put the question to Steven Levitt in an email:

I’m interested in the practical implications of your parenting chapter. It’s

wonder whether or not it’s worth it. I’ve seen lots of citations of the value

of a college education, but I’ve seen nothing about the marginal value of

it’s nonzero. Do you think this is something which private schools can or

should be able to provide? Data showing that, after adjusting for parents’

income etc etc, privately-educated kids do measurably better than they would

have done in their local public schools?

Absolutely fantastic question. It is something I have been interested in

myself, but haven’t done research. It is a tough question, but the best research

black children. I am not aware of any evidence on college prep type of private

schools like the one I went to, but it may be out there. My own research,

which we touch on in the book, suggests that peer effects are much less important

than people tend to think — folks aren’t good at separating inputs from outputs.

Which is your point I think. The biggest peer effects we see in my work is

on outcomes like going to jail, but almost nothing on test scores or graduation.

Well, now we have some data, and it seems to show that paying for a private-school

education is money very badly spent: it’s like shelling out for a mediocre car

when the government will give you a better one for free. 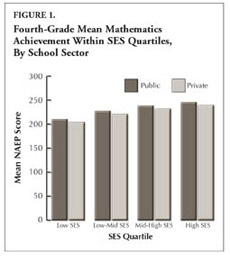 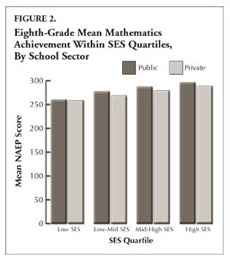 In all four quartiles in both grades, public-school kids clearly outperform

their private-school counterparts. Although private schools

do have better mathermatics results than public schools, that’s entirely because

the kids in those schools are more privileged.

assumptions regarding the effectiveness of public and private schools. As

market-style reforms change the public school landscape, prompting many to

call for various forms of privatization of schooling options, it is important

to examine the evidence regarding whether private schools are, indeed, more

effective than public schools. In our study, once we accounted for the fact

that private schools tend to have higher-SES students than public schools,

we actually found just the opposite of what was expected: public schools outperformed

private schools within each SES quartile.

I could put it more simply: send your kids to public school.

They’ll do better than they would at private school, and with the money you

save you can further improve their upbringing, education and lifestyle in many

UPDATE: It turns out there’s a more extensive and later survey, with much the same conclusions, which can be found here and was reported on in the NYT here.

21 Responses to Public schools are better than private schools