Many thanks to Gari N Corp for recommending this

I compare academic reports with the journalism which reports on them.

At first, I thought the Slate article would get high marks. I wasn’t convinced

Goolsbee, is an economics professor in his own right, rather than an innumerate

After reading the underlying research, however, I have to give the Slate article

a C–. The research simply doesn’t say what Goolsbee says

it says, and in fact the government of Santiago, where the research took place,

has drawn exactly the opposite conclusions to Goolsbee.

The underlying research here is a paper

called "The War for the Fare", by Ryan Johnson, David

link to find it: Goolsbee unhelpfully links to an NBER page which will charge

According to Goolsbee, the paper shows that if cities like Chicago moved to

an incentive pay system, rather than paying their bus drivers a fixed hourly

rate, that would improve productivity, "raise efficiency and save tax dollars."

Goolsbee frames the question simply: why do Chicago bus drivers sit in traffic

on Lake Shore Drive, when they could use surface-street shortcuts instead? His

answer: they wouldn’t benefit, financially, by doing so. And if you look at

what happens in Santiago, where drivers are paid per passenger rather than per

Paying by the passenger leads to significantly shorter delays. Give them

incentives, and drivers start acting like regular people do. They take shortcuts

when the traffic is bad. They take shorter meal breaks and bathroom breaks.

can. In short, their productivity increases.

Does paying by the passenger lead to significantly shorter delays? It depends

on what your definition of "significantly" is. The Santiago study

to wait 15% longer, on average, when the driver is paid a fixed wage rather

Does Chicago have 30km bus routes? I don’t know. On shorter routes, the effect

will be smaller. Here’s the scatter chart: 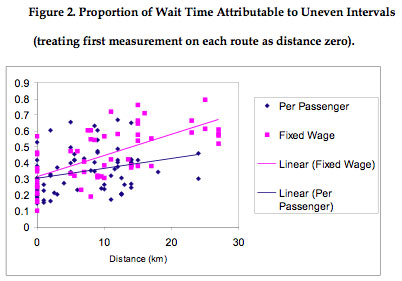 As you can see, in aggregate the per-passenger buses do have slightly shorter

wait times than the fixed-wage buses. But the difference isn’t huge.

Do the per-passenger buses "take shortcuts when the traffic is bad"?

he cites is completely silent: there’s no mention of shortcuts at all.

Do they "take shorter meal breaks and bathroom breaks"? Yes.

Goolsbee omits, however, most of the downside to paying drivers on a per-passenger

rather than a per-hour basis. Here’s what he says:

Not everything about incentive pay is perfect, of course. When bus drivers

start moving from place to place more quickly, they get in more accidents

(just like the rest of us). Some passengers also complain that the rides make

gets on the bus. Yet when given the choice, people overwhelmingly choose the

bus companies that get them where they’re going on time. More than 95 percent

of the routes in Santiago use incentive pay.

Do drivers paid on a per-passenger basis get into more accidents? Yes. The

report shows that they have 10.03 accidents per million kilometers travelled,

compared to just 5.98 accidents per million kilometers travelled on the Chicago-style

buses. That’s a huge difference, which can’t be shrugged off by saying that

they are "moving from place to place more quickly". The pay-per-passenger

front of them, and pick up all of the passengers which the bus in front would

otherwise get. So they are likely to drive more aggressively, and less safely.

As for feeling nauseated, the report finds that

Once a bus finally does stop, the driver quickly gets the bus moving at full

speed, often in complete disregard for the stability or comfort of the passenger.

This causes not only nausea, of course, but also injuries:

with drivers paid a fixed wage, we estimate that it would save 55 lives per

And these numbers actually understate the likely truth, because the per-passenger

In economic terms, then, moving from a per-hour system to a per-passenger system

is a tradeoff. On the one hand, people will wait slightly less for a bus, and

that saved time is worth money. On the other hand, they will be killed and injured

in bus accidents more frequently, something which carries a significant economic

cost of its own.

There is another reason why the pay-per-passenger system is flawed, which Goolsbee

When a passenger is waiting at a stop alone, sometimes the driver won’t

is greater than the income from the fare. In fact, often times a single passenger

A public service such as a bus system should treat all customers equally, but

moving to incentive pay gives drivers an incentive not to.

And Goolsbee is downright wrong when he says that "when given the choice,

on time." The citizens of Santiago are not "given the choice"

between bus services running on a per-passenger or per-hour basis. Some bus

routes pay one way, other bus routes pay the other. You take the bus which goes

Does the report conclude, at least, what Goolsbee says it concludes? Not really:

for passengers, than does fixed-wage compensation. However, this clearly

does not mean that per-passenger compensation is a superior system.

We find significant costs to the per-passenger system as well. In particular,

per- passenger compensation exhibits a much higher incidence of accidents

and much lower passenger comfort.

use incentive pay". Here’s what we find in the report:

In 2006 Santiago will complete a dramatic overhaul of its bus system. The

plan, called Transantiago, will replace the current system of disorganized

owners with a dozen or so large companies. Partially influenced by

conclusions of this research, drivers will all be paid a fixed wage.

Not exactly the outcome you might have expected from reading Goolsbee’s article,

I do think the wait times are quite economically significant ($38,000 worth

of lost time per day!), and I’m disappointed that you don’t mention what we

think is the most important point in our article. We think that there are

significant gains to be had in improving bus spacing, and we’re interested

in finding ways to do that without promoting accidents or discomfort. We think

that it’s well worth exploring what types of driver incentives will matter,

way that causes traffic externalities). I would prefer it if your Report Report

the stuff about GPS-based incentive systems. But I’m happy to oblige.

At the end of Reiley’s report, we find this:

With a full implementation of GPS technology, drivers could have information

on the location of other buses at all times, not just on corners where sapos

work. Drivers could have a real-time display showing the locations of other

buses both in front of and behind them, enabling them to respond with adjustments

to the spacing. GPS technology opens up a whole new realm of contractual possibilities.

For example, one might pay drivers a bonus based on the continuous-time average

spacing between their bus and other buses on the route, thus providing drivers

with appropriate incentives to minimize passenger waiting time. Such systems

could improve quality of passenger service in cities like Santiago, and could

be potentially even more useful in the cities of developed nations.

At some bus stops in central London, there are now signs which tell passengers

how long it’s going to be until the next bus arrives. The technology for these

static signs was expensive, but they are certainly useful. What Reiley is proposing

is easily readable by bus drivers. I don’t know whether that technology exists,

how reliable it is, or how expensive it is. Neither, I suspect, does Reiley.

some drivers more than others, especially when bonuses would be based on something

as abstract as "continuous-time average spacing". There could be unintended

consequences, too, such as drivers not stopping at bus stops if they’re too

close to the bus behind them, or being much less willing to help out wheelchair-bound

and off the bus would throw off their bonuses.

telling tourists when it’s their stop, etc. Would trying to keep up with dynamically-generated

GPS maps impact the other aspects of their job?

It’s clear, then, that there would be a significant number of costs associated

with a scheme like the one Reiley proposes. Maybe a pilot scheme somewhere could

those costs. But I suspect that simply adding more buses on busy routes might

be an easier and cheaper way of decreasing average wait times.

In any case, Reiley’s plan involves a significant up-front expense: at the

bare minimum it involves kitting out every bus with a computer and GPS system,

as well as setting up a centralised system for calculating and paying bonuses.

It’s a far cry from the quick fix that Goolsbee implies is possible.

UPDATE 2: I’ve had an email exchange with Austan Goolsbee,

some of which might be of broader interest. Said Goolsbee:

And then at the end I must wonder if you have gone crazy: "In 2006 Santiago

will complete a dramatic overhaul of its bus system. The plan, called Transantiago,

large companies…drivers will all be paid a fixed wage." Are you under

then removing all incentives to the drivers is a good idea? It is a recipe

for monopolization. Prices will rise and delays will get worse. You are not

a change being imposed by the government. Why would you expect this to raise

consumers’ value when the evidence shows exactly the opposite?

As for the Transantiago plan, again that was taken straight from the report

(footnote 23). It seems to me that its introduction could present you with

a prime opportunity to test your hypothesis about incentive pay. Wait for

a little while, and then see whether prices have gone up, delays have gotten

worse, or passengers are less happy. But in my experience, Chilean government

officials are generally the most economically sophisticated government officials

I’ve ever met. (Did you know that every single minister in the new government

has a postgraduate degree?) And they were very aware of the findings of this

report when they made their decision.

If you look at what Chile is doing with toll roads, you’ll know that it remains

a leader in terms of bringing private-sector discipline to government functions.

(And, of course, it was the first country ever to embark on a major privatization

program.) I would look very carefully at the Transantiago plan before dismissing

it as "being imposed by the government" and therefore likely to

And Goolsbee wrote back:

federal government people predominantly have Ph.D.s from here at U. Chicago

(and indeed I taught several of them Ph.D. Public Finance). My impression

was that this was more of a city level thing.

more delays and the concentration of ownership to higher prices. We will agree

to revisit this issue in a year and see if it was born out. I am prepared

to admit that the incentives didn’t work if that doesn’t happen.

Someone remind me to ask about Santiago’s bus prices in a year’s time!