I only just noticed that Gawker Media finally has a website.

to it back in October, and I have no idea how long it was up before then. It

of titles, and neither is Fleshbot, which recently got elevated to the Gawker

Media logo/masthead thingy. In any case, there are three

with Gawker’s ad rates, so you can easily see how much blog advertising can

cost these days. It turns out that a banner across the top of the page costs

less than a box well below the fold: internet readers must really be good at

tuning out ads which aren’t in the direct line of copy. 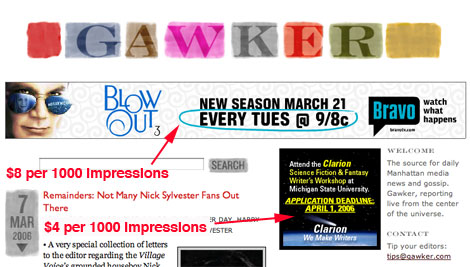 As ever, Nick Denton is good at letting the public see his stats: we can see,

for instance, that Defamer not only gets significantly more traffic than Gawker,

but even gets more traffic than Fleshbot.

pageviews per day; the brand-new Consumerist and Valleywag are already up to

respectively, and I’m sure will rise much higher. Kinja I’m not sure about,

but we can assume it’s negligible.

There are some interesting numbers there: I, for one, had no idea that Kotaku

was so popular, or that Sploid and Gridskipper were still going absolutely nowhere,

even with Gridskipper’s archive pages slowly beefing up. In any case, Gawker

Media’s total inventory, adding everything up, is now over 2 million pageviews

In theory, if all four ad spaces were sold on each page, that would generate

$28 per thousand pageviews. In Gawker’s case, if all four ad spaces were sold

to the same advertiser, it would generate $50. But the fact is that most of

Gawker Media’s ad pages still seem to be pretty free of ads most of the time,

except for text ads sold by Adbrite.

Let’s say that in reality, Gawker Media gets $3 per thousand pageviews. That’s

thinks it will have revenue of $20 million this year. If Gawker Media could

of course, there’s whatever revenue Gawker gets from its deal

Nick Denton clearly loves launching blogs, and I’m sure he’s both got and is

dollar out of Gawker Media that he can. But it’s worth noting that if Gawker

Media were to partner with a media company with excess demand from online advertisers,

Denton could offer over three quarters of a billion pageviews per year:

he’s certain to hit the billion mark pretty soon. Not that Gawker Media is for

sale, of course. But think about it: iVillage was generating

that Fleshbot seems to be fully part of the Gawker Media fold. The company is

not a natural fit for any strategic buyer, even if headlines like this

one are not quite as common as they used to be. But the fact is that his

equity in Gawker Media is worth a hell of a lot of money. If I had to guess,

I’d say that Nick will build his up traffic for another couple of years, suddenly