According to Nick Kristof of the New York Times, MIT’s Kerry Emanuel is a "hurricane

Nature just before Katrina hit the US. What did that study say? According to

Nature magazine this summer reported a new study by Kerry Emanuel, a hurricane

guru at M.I.T., indicating that by one measure hurricanes have almost doubled

in intensity over the last 30 years.

That’s what Elizabeth Kolbert, in the New Yorker, thinks

Emaneul is saying, too:

In a paper published in Nature just a few weeks before Katrina struck, a

researcher at the Massachusetts Institute of Technology reported that wind-speed

measurements made by planes flying through tropical storms showed that the

“potential destructiveness” of such storms had “increased

markedly” since the nineteen-seventies, right in line with rising sea

between global warming and storm intensity. But it’s an entirely theoretical

one. In the Aug. 4 edition of Nature, Kerry Emanuel of the Massachusetts Institute

of Technology presented math models that he said "show a substantial

to the prediction that actual storm intensity should increase with time."

Emanuel concedes, however, that the observed storm intensities do not match

global warming "may" lead to more intense storms. In the New York

Times last week, he agreed with Gray and Klotzbach that the increase in hurricane

activity the last two years "is mostly the natural swing."

What’s this about the New York Times? It turns out that alongside Nick Kristof’s

to Mr Emanuel as well. Here’s what the article says:

In an article this month in the journal Nature, Kerry A. Emanuel, a hurricane

expert at the Massachusetts Institute of Technology, wrote that global warming

North Pacific — including typhoons in the Pacific and Indian Oceans

of the past two years, Emanuel said, adding, “What we see in the Atlantic

is mostly the natural swing.”

It certainly seems as though Slate’s Recer is being economical with the truth.

Hurricane Katrina, or even for an uptick in hurricane intensity over a short

period of time like two years. That’s likely to be natural swing. But if you

look at the past 30 years, then clear anthropogenic patterns can start to emerge.

But don’t take my word for it: Kristof helpfully links to the actual

measurably greater now, and that global warming is at least in part responsible.

And once you read the paper, Recer seems even more disingenuous. While it’s

predict," Recer fails to inform us that that’s because the observed storm

intensities are actually much greater than what the models predict.

Far from the correlation with global warming being "entirely theoretical",

the observed data more than backs the theory up.

have more than doubled over the past 30 years. Meanwhile, a model based on sea

surface temperature alone would predict that those intensities might increase

by about 10%. There is another model, however, based on temperature in the troposphere

more broadly, which shows storm intensities increasing by about 40%.

be explained by the increase in sea surface temperature. Other factors, like

to explain the rest of the increase – as well as cyclical factors.

But is Emanuel just a lone crank? That’s the impression that Recer gives:

After 24 years of relative quiet, more than 30 major hurricanes have churned

in the Atlantic since 1995. Most researchers, however, think that increase

has nothing to do with global warming. Those who study tropical cyclones say

But note that Recer is fudging a little here: while the sharp increase over

the past ten years might be cyclical, would "most researchers" say

the same thing about the increase over the past 30 years? Here’s the graph: 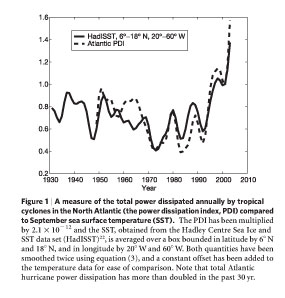 What Emanuel is talking about is the steady increase from the mid-1970s, not

the shocking increase from the mid-1990s. Yes, hurricane intensity is obviously

cyclical, to some extent. But that doesn’t preclude a secular increase as well.

But this is where science journalism starts to break down. We can’t all go

back to primary sources and check for ourselves; and in any case, the vast majority

of us are quite unqualified to read charts like the one above. Ultimately, we

have to take it on trust that journalists are presenting research fairly. It

could be true, pace Recer, that most scientists think that increased

storm intensities have nothing to do with global warming. On the other hand,

Kristof doesn’t simply site "most researchers": he cites names and

papers of many scientists saying quite the opposite.

things. I wonder if my sister might be intersted in providing such a thing.

6 Responses to Hurricanes and global warming