When we become what we formerly scorned

I had this very conversation just yesterday, when my friend Ephrat came over

at lunchtime with a tailcoat she’d embroidered for my upcoming wedding. But

is railing at don’t apply to me. But I don’t kid myself that she wouldn’t include

me in that group anyway. Over the past year I’ve proposed marriage, gone apartment-hunting,

and actually bought a new place on Avenue B and 3rd Street. Before long I’ll

yard. This Is Not Punk Rock.

When I moved to New York, I had the time of my life. I partied all night, I

had platinum-blonde hair, I wore ridiculously outrageous clothes which had made

it to Century 21 because no right-minded male would ever buy them. I shared

a basement duplex with a transexual party promoter and too many cats, I subsisted

mainly on $1.50 slices of pizza, and I spent significant amounts of time comparing

prices on Levi’s 501s so that I didn’t spend an extra $4 unneccessarily.

The company I worked for didn’t pay us website people very well, which meant

we couldn’t afford to go to the coffee shop in the lobby every day. We therefore

went out and bought our own coffee machine instead. Which had a habit of overloading

we turned it on, which was kinda funny.

Over time, things changed. Even as my disposable income rose, my desire to

go out and party all night waned. The process was accelerated when I changed

jobs: the new one entailed getting up very early every morning, which meant

that come Friday I’d normally be passed out on my bed by 7pm.

You can look at what I was writing

in mid-2001 and already it’s clear that I’ve become a privileged yuppie, albeit

one who hates himself for being that. Ephrat told me yesterday that a self-aware

yuppie who, in Lindsay’s terms, "starts believing a person can be interesting

just because they’re famous or rich".

Meanwhile, Ephrat herself – a woman who has dedicated her life to making

the world a better place, and who values her beliefs much more than any job

– even Ephrat is occasionally tormented with worry about her New York

City lifestyle and whether it’s not a little hypocritical. Which means there’s

really no hope for me.

But I’ve been this way for a while, now. My decisions to become a property-owning

married man are maybe not as momentous as they seem, insofar as in many ways

they only ratified my pre-existing condition. I’ve been living in this same

apartment for well over 7 years now, firstly with a succession of roommates,

but then the last one moved out and Michelle moved in. At that point we had

an entire two-bedroom apartment to ourselves: we had attained a comfortable

lifestyle which, once achieved, is very difficult to give up.

I do envy my younger self, and his ability to have a great time without the

need for comfort and luxury. I envy people like Ephrat, or Lindsay, or my sister,

who are still in that place today. I feel a bit like David Byrne, who got

the question right many years ago:

And you may ask yourself-well…how did I get here?

And you may tell yourself

My god!…what have I done?

The easy answer, of course, is also the difficult one. It’s "well, I’ve

grown up". It’s something I never really wanted to do – something,

their smug security and their indulgent attitude towards the likes of me.

And there are some people who are very good at not growing up. Four years ago,

of a friend of mine who was getting married: "Congratulations," he

essentially said, "on growing up even as I never managed to". I jumped

to my friend’s defense, and gave a speech of my own. No, I said, my friend wasn’t

a boring grown-up. He might have a posh job and a beautiful wife, but he was

Mark’s tenement with the bath in the kitchen and the toilet down the hall.

Well, I was wrong. My friend had become a grown-up, much as I refused to believe

it, and now I’m becoming one too. Or rather, I’ve been one for a while, and

now I’m admitting it. "Let’s not become what we’ve always hated just yet,"

says Lindsay. "Or is it too much to ask – ever?" Maybe, Lindsay, it

is too much to ask. I wish you luck in your endeavour, but ultimately

it’s not a binary thing: we all fall somewhere on the spectrum, and a Manhattan

I’ve long believed that the secret to happiness is not getting what you want,

so much as being happy with what you’ve got. (Don’t worry: that’s about as Deepak

Chopra as I ever get.) That’s why I’m not ambitious. Other people can chase

their dreams; I’m happy as I am. Or that’s the theory, anyway. In practice,

what if you don’t want more, but in fact you want less? What if you

have a bizarre love-hate relationship with your disposable income? On the one

hand, I love having the freedom to wander down to the local coffee shop for

a capuccino and a salami sandwich whenever the fancy takes me. But on the other

hand I feel that I don’t really deserve or need that freedom, and I’m perfectly

capable of looking after myself without it.

I certainly have no interest in returning to my lifestyle of eight years ago:

I’ve discovered the wonders of monogamy, for one thing. And in any case I’m

probably getting a bit old for that kind of thing. So maybe I should just be

happy that I was happy then and am happy now.

The way I see it, one always cuts off possibilities over time: it’s part of

what growing older is all about. Youth is about exploring those possibilities,

choosing some and spurning others. When we spurn possibilities in our youth,

we don’t notice it so much, because there are so many left. But eventually you

wife and you ask yourself how you got there. And it was never a considered decision,

it was just a concatenation of natural choices. It’s like the present debate

over intelligent design: just because something looks premeditated, doesn’t

mean it is. And just because you didn’t always want to end up here, doesn’t

mean that here isn’t actually a pretty good place to end up. 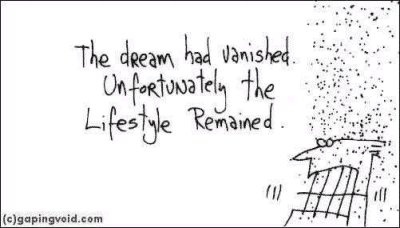 Bohemianism, for lack of a better term, is a lifestyle and a dream: it’s a

way of living, and a desire to keep on living that way forever. Hugh Macleod’s

is one of his classics: one of the ones he explicates on this

page. Here’s how he describes it:

or regular sex to tide things over etc etc.

It wasn’t as interesting as it used to be. But I hadn’t moved on, really.

And I had no idea where to go next.

For Hugh, the bohemian dream had faded, but the lifestyle remained. For me,

it’s the other way around: the dream remains, but the lifestyle is now long

in my past. I think I’m better off this way round.

19 Responses to When we become what we formerly scorned