I have just been on a most spectacular jolly down a fjord on (in? at?) South

Georgia. Drygalski Fjord. Spectacular. Even those who had seen rock in the last

year were staring with gaping jaws. And grinning like pigs, if pigs could grin. 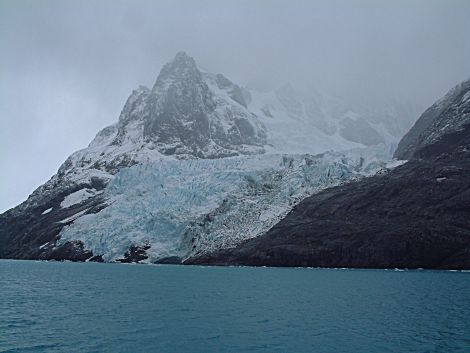 We’re talking ice, ICE, 30m high at the end of the glacier and that’s

just where it pours off the rock. Glaciers everywhere it seems, to my uneducated

eye. And cliffs, mountainous, peaks in the clouds, towering around us. I couldn’t

really cope with the scale. From our little dinghy it all seemed very big but

then, when I got back on the Shack, it all seemed even bigger. 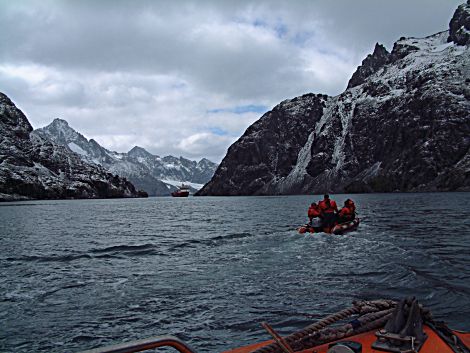 The spray of salty ocean in my face, the taste, the smell of seaweed and cry

of birds all around us. 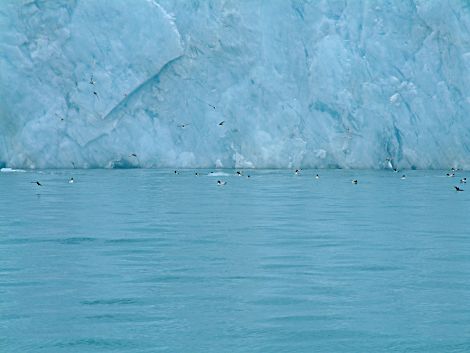 us. The Fjord is long and deep, as you would expect, but reasonably wide. Wide

enough to hold many bays each with it’s own glacier pouring into the ocean.

many outlets but I didn’t have a bird’s eye view. I was at sea level

in an inflatable boat, loving the waves. At the far end of the first end we

visited (that I at the time thought was the only end to the fjord), were hundreds

of little storm petrels floating on the surface, below the ice cliff. Like flies,

but pretty. Further back, a bunch of giant petrels gathered around us, trailing

water as they ran and flapped in an attempt to become airborne. A few penguins,

camouflaged on the black and white scree. The occasional seal, loafing. But

these were the jesters giving scale to the land, the ice, the rock, ice pouring

on ancient timescales, splashing into the bay beside us. 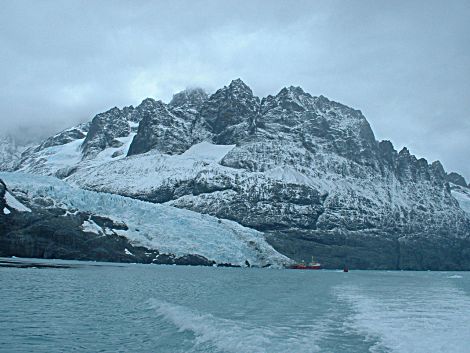 The last fjord we visited was called Larsen Harbour. I don’t think any

of us jolly merchants knew where we were going at this point, or what to expect.

If the main fjord was a motorway, this subsidiary was the lane you leave on.

(I can’t even remember the words for these things!) It was thin and quiet,

sheltered, the cliffs towering and vertical. And long. We explored, our little

boat and the fibreglass rescue craft, continually expecting an end in sight.

And it kept going: deep, thin and quiet. Oh yeah, and cold. Our skipper stopped

the boat at the far end and out we climbed. That’s right, we climbed out.

The first rock I have stood on for 14 months. Not a bad re-introduction I would 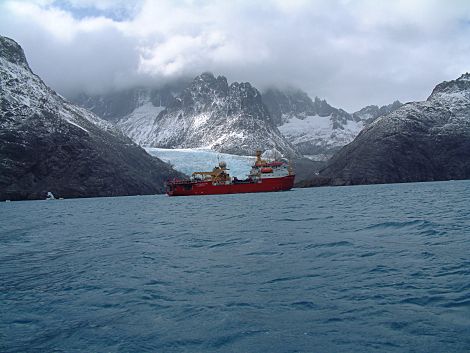 The above happened three days ago. Since then we’ve spent two days at

Grytvikken and are now floating off the coast of Bird Island. My feet have been

re-introduced to land! And how luscious it feels. Soft soggy green moss that

the sun after eating a packed lunch. Entire days outside without having to fear

South Georgia was still as beautiful

as ever and the people and wildlife as friendly. King penguins, elephant seals,

burnet clusters that stick all over your feet and legs. Men playing football

on the old pitch set up by the whalers early last century. The old church, I

fur seals and other dangers, a king penguin with freshly hatched chick. The

a WW1 gun, wildlife overtaking them all. If any of you out there reading this

ever consider an Antarctic cruise, make sure this island is on the itinerary!