things about this city, quite literally, is the winter sun. We Europeans are

used to drab, gray winters, where the few hours of purported sunlight are invariably

overcast and usually drizzly as well. In New York, you wear sunglasses in the

freezing cold, something Europeans only normally do when they go skiing.

It’s only natural, then, that Christo and Jeanne-Claude, both Europeans in

New York, would want to create for New York an artwork which captures the sunlight.

The way they did that was by taking their trademark fabric and making it free-flowing,

rather than wrapped around or on top of something. If a Gate is in the sun and

you look at it from a northerly angle, the sun sets it alight; if you look at

a whole pathway of Gates from the north, it is transformed into a river of fire

Jake Dobkin has taken some of my favourite photos

of the Gates; here you can see in one photo just part of the range of colours

and textures that the Gates form in concert with the New York winter sun. 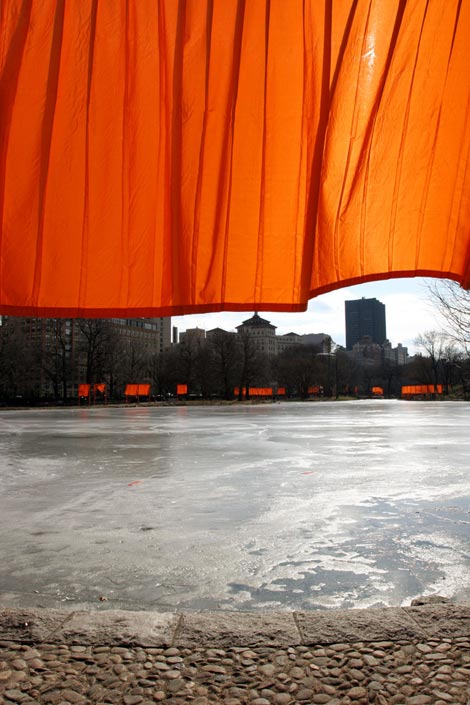 The Gates isn’t just about colours and textures, however. It’s an aural piece,

too: every time the wind blows through a Gate, the fabric rustles and snaps,

and you’re reminded afresh of how these totems, so magnificent to look at, are

also a very impressive physical accomplishment. The numbers are so big as to

be meaningless, so I shan’t bother you with the familiar litany; I’ll restrict

myself just to mentioning that there are over 7,500 of these things, any one

of which on its own would be a Central Park landmark in its own right.

Most of all, the Gates are not something to be gazed at, or listened to: they’re

something to be walked through. This is ambulatory art: anybody buying one of

likely to be disappointed. Staring at the things through binoculars is no substitution

from reaching up and touching them yourself; what’s more, as one look at any

of the aerial photographs will show, this particular work of art is no more

suited to being seen from above than is a Picasso.

Christo has been saying that the Gates aren’t something to be talked about,

and that if you want your questions answered, you should just walk the 23 miles

of Gated pathways. In fact, although that would be an interesting exercise,

it would also be unnecessarily constraining. The Gates are great to walk under,

to be sure. But they’re also great to view from a distance, to walk away from,

few of them – the Ramble, perhaps.

In fact, one of the most surprising parts of my visit to Central Park today

was when I wound up walking through the zoo, and briefly found myself in one

of the few parts of the park where no Gates were visible at all. Suddenly I

felt very sad: the Gates had really brightened me up, and their unexpected disappearance,

even if it was temporary, hit me quite hard. I have a feeling that when the

Gates come down forever in a couple of weeks’ time, New Yorkers will mourn their

Christo, of course, knows all about temporary art projects – he specialises

in them. Ane he also specialises in their politics. I have a feeling that one

is not because that’s the "best" way to view the art, but because

the crowds would damage the park – might turn out to be justified. Even

after only 24 hours, the grass to the side of many of the pathways has been

turned into large patches of mud, as people walk off the paths to get the perfect

camera angle, or just to walk around the slow-moving crowds. The park is heaving

with people, which is great for Christo, and makes for a very festive atmosphere,

but which might not be so good for the turf.

In fact, the general mood in Central Park these days is like nothing so much

as that of Ueno Park, Tokyo, during the Cherry Blossom festival. Everywhere

miles around; the commercial side to it is large-scale but tastefully done,

and the crowds are heavy but not oppressive.

Interestingly, the crowds are also very monochromatic. New York City is a wonderfully

multicultural city, but the Gates crowds are nearly all white. Art tourists

will come from all around the world to see this piece, but I do worry that New

York’s black population, much of which lives very close to Central Park, has

yet to get as enthused by this piece as the rest of us have. I can’t think of

a single friend of mine in New York who won’t go to see the Gates;

yet the total number of visitors, I have a feeling, is going to end up a mere

fraction of the total population of New York City. (My guess? Somewhere in the

2 million range, and that includes double-counting of people who go more than

once. New York’s population is 8 million.)

Still, there is no doubt that this is public art on an enormous scale, and

says that "it will probably be the most photographed event ever;"

I don’t know if that’s true, but there were certainly thousands of photographic

devices in Central Park today, including one fellow drawing a crowd with his

small-mindedness here: these Gates are for everybody, and most people who go

to see them are likely to want their own memento of having been there in person.

This is art to live in the memory for decades to come. As Michael Kimmelman

this morning, "Once upon a time there were The Gates. The time is now."

So, are the Gates good art? Are they even, maybe, great? That’s a hard question,

and I’m reserving judgment; I’ll go back again, for sure, and make up my mind

slowly. Here’s another photo from Jake, which gives an idea of some of their

formal qualities: looked at from the middle distance, as they march and flutter

in unison, they seem monumental in a slightly dated, 1970s sense, a work of

art which wouldn’t be out of place at Storm 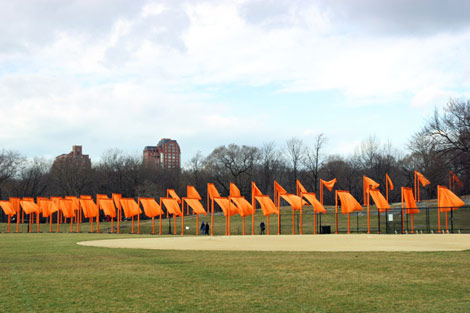 On the other hand, 1970s monumentalism rarely came up with anything as subtle

and beautiful as this. And, more to the point, it never made hundreds of thousands

of people incredibly happy. Maybe art is too limiting a box to put this kind

of public event into: it’s already been compared, in terms of its audience,

to things like the St Patrick’s Day parade. There’s no doubt that the Gates

too, is almost beside the point.

6 Responses to The Gates