I’m writing to you on a Sunday afternoon, the rugby on, fairly loud, in the

as the game was only played about 2 months ago. It must be summer. This morning

Bones has his video camera out and is taking footage of newly formed wind-tails,

Piglet has gone out kiting with an ever increasing number of recruits. Boards,

kites and harnesses are being bartered for over the Sunday fry-up. Next door,

in the dining room, those still recovering from last nights revelries are watching

the 24 series back-to-back. The rest of the CAS Lab team have gone to the lab

to work on their machines and check for damage after yesterdays storm. I’m on

my fourth cup of tea and have no intention of leaving the Laws platform today,

at least not for long. A fairly normal Sunday.

Yesterday afternoon, as I was helping peel spuds in the kitchen, Kev asked

me if I was looking forward to going home. It was tricky to answer honestly

for the coming winter here so yes, I guess I am. At the same time, I’m very

comfortable here, very happy, the lifestyle suits me and I feel very much at

home. Flying back from the skiway last week on the back of a skidoo driven by

Ness, having received the first load of ice cores from Berkner Island, my only

regret was that this lifestyle isn’t possible under more sociable circumstances.

Perhaps I should move to Alaska. 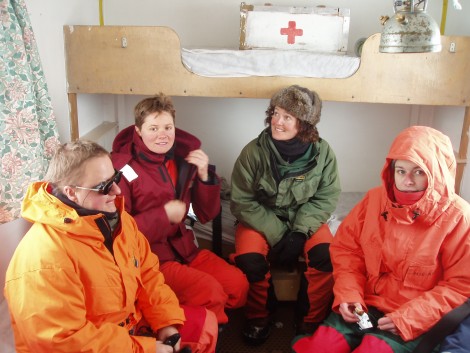 Last weekend was New Year’s Eve and our first weekend after Relief. It was

a good party but the male:female ratio was still a bit too weighted against

me despite the arrival of eight more women with the ship, so I slipped out early.

The next day we went to see the penguins en masse, 17 people in our group and

about 27 the following day. 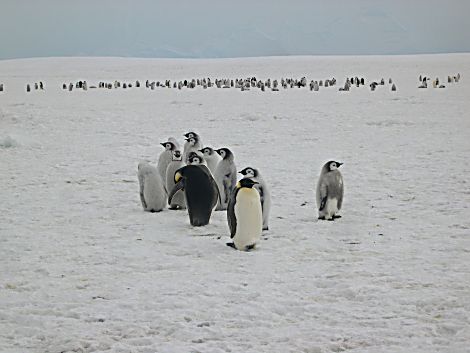 the complete cycle now. Our first trip in August was extraordinarily cold, the

penguins huddled to stay warm protecting eggs and tiny chicks on their feet.

stayed in loose groups as the chicks grew up and became a bit more inquisitive.

The last two visits have shown the end of the cycle – chicks spread out,

fat and moulting, cooling their bellies on the snow as it’s now too hot in the

sun. The landscape is completely changed now as well – the sea ice has

melted and broken up, open water is only about a mile from the cliffs. Birds

for nesting sites. The ice itself is lumpy, brown and covered in melt water

puddles, entirely formed by the presence and residue of thousands of penguins.

single file as nowhere is it smooth enough for belly sliding anymore. While

newcomers were amazed by their numbers, I found it almost sad to see how many

fewer penguins there are now. But the ice won’t be around for much longer so

What I really missed was the welcoming party, those adolescents, a year or

two old but still too young to breed, who used to come right up to us during

our visits. They’re all off playing in the ocean now, feeding themselves up

for the next winter. All that is left are fat moulting chicks and a few adults

keeping an eye on the crèche. None of them are particularly interested

in us and the little ones are visibly disturbed if humans get too close. It’s

more as you would expect I guess.

Here on base, the season has been going very well. Relief was smooth and quick

and the weather, until recently, has been superb. On Friday a storm arrived

that has almost died down now. A few days of 20-40 knot winds is a good experience

for the new folk though and not setting us back too much this early in the season.

The CAS Lab is noticeably less stressful than last year, a combination of Stéph

there to help the campaign, all of whom are experienced and keen.

cycle of living here: the new summerer, entranced by the magic of the ice, the

new winterer, nervous but excited by the prospect, the winterer, at home in

the dark and cold, and now the more experienced summerer, fully at home and

loving this place for everything it is. Able to stay in on a Sunday and enjoy

rugby and tea as much as skiing around the perimeter. At the end of February

I’ll get on a big red ship and sail to the Falklands. After that I’ll travel

into the world of work and green in Cambridge. After that, who knows.