I just got off the phone with a friend of mine. "You know everything,

Felix," she said, perspicaciously. "Instead of buying a loft, would

it be cheaper to buy a loft building and then convert it into lofts?"

The answer, like the answer to any question, is "it depends". Certainly,

some developers do seem to have made

out very well that way. But let’s consider a specific building on the Lower

East Side of New York. Lofts around here are rare beasts, but look at the sale

prices at 7 Essex: none of them seem to exceed $700 per square foot. Let’s

be generous, and say that in the wake of recent trend-seeking

developments, the going rate for LES lofts is now $800 per square foot. 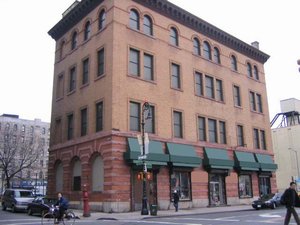 1920, on the north-west corner of Essex and Broome. The building is 37 feet

wide by 81 feet long, which means that it has just under 3000 square feet of

Let’s put the ground floor and basement – the 3,600 square feet of retail

space – to one side for the time being. There are then three floors for

apartments. A standard real-estate rule of thumb states that to work out what

the stairwells and the width of the walls), you take 85% of the gross external

square footage. If you decided to build floor-through apartments, that would

give you three apartments at about 2,550 square feet each. At $800 per square

foot, that would value each apartment, when fully converted and kitted out,

Now, it’s worth noting that no apartment has ever sold for anything like that

amount of money on the Lower East Side, let alone below Delancey Street. But

lofts, you could get $6 million for them. Then there’s the retail space –

let’s add on another $2 million for that. (I have no idea who might spend $2

million for retail space on Essex Street, but there’s gotta be a sucker out

there somewhere, right?) Total, once all the work is done: $8 million. So if

you bought the building for $5 million, say, and spent another $1 million doing

it up, you might stand to make some money by selling it off as lofts.

Then again, maybe you’re the Eisner Brothers, owners not only of the eponymous

sporting-goods store presently on the ground floor, but also of the entire building.

there, in anybody’s book.

Maybe the Eisners want more, however. Should they perhaps do the loft conversion

themselves? No – they should rather find someone willing to spend even

more than $5 million on this building. And the way they can do that is by using

The Eisners’ building, it turns out, is on a lot which measures 51 feet wide

you tore this building down and put a new one in its place, you’d be allowed

feet per floor – ie, if you didn’t increase the size of the present building

at street level – that would mean a nine-story building, plus basement.)

This is where my expertise runs out. I have absolutely no idea how much it

would cost to demolish the present structure and put up a new one, and I also

on top of the building which is currently there. All I know is that if you go

to weichert.com, you can find this building on

usable above-ground square foot. And that’s before it’s converted into

What kind of return does that give the Eisner brothers, you ask? Well, if you

store profits. Even by New York standards, it seems that the Eisner Brothers

made themselves an astonishingly good investment back in 1985. In comparison,

property is ten times better, as an investment, than the stock market!

Then again, I can’t imagine who would be interested in buying the building

for anywhere near $25 million. Let’s say demolition and construction costs are

Conveniently enough, that translates into, realistically speaking, an absolute

maximum of 25,000 usable interior square feet. So anybody buying for $25 million

would be spending exactly $1,000 per hypothetical square foot, before spending

a single penny on actually building those apartments.

Back when there was a bubble in oil exploration companies in the 1970s, it

used to be said that oil was worth more in the ground than it was in the barrel:

by the stock market more highly than an actual traded barrel of oil today. The

same thing seems to be going on here: unbuilt apartments are being sold for

more than real, built ones. Looks like the days of converting Manhattan loft

buildings and making a fortune are, unfortunately, far in the past.

This entry was posted in Finance. Bookmark the permalink.