arises that makes the week even more extraordinary. So much so that the initial

inspiration now almost smacks of the ordinary. So I’ll just list them as they

On Tuesday, we had record warm temperatures. I am almost ashamed to admit

that temperatures soared above freezing to +0.3C. There was water on the platform,

beads of condensation drops dribbling down windows, snow so soft it was soggy

and you sunk into it wherever you walked. It felt like a rainy day, we were

all too warm, and it was not in any way pleasant. At the lab, we had to open

snow samples melted before we could get them to safe refuge in the tunnels.

change during melting. Nothing I wore was suitable and I was dripping with sweat

after walking home from the lab.

Water! We were not impressed. We will ofcourse be even less impressed when

the truly cold temperatures return as everything that got wet will freeze solid.

Only then did I realise how much we take this dry environment for granted. Everything

that’s solid is happily left outside. The only real dangers are freezing or

being buried by snow. But it’s dry snow. Toolboxes, skis, items of clothing,

bags of rope, cardboard boxes, waste food, sleeping bags even.. stuff you would

of steps before being moved on elsewhere. This week, for the first time in at

least a year, things got wet outside.

On Thursday the melt-tank was completely drained for its annual cleaning.

Gallons and gallons of water just being thrown out. The melt-tank at the summer

accomodation was filled, washing machines were in continual use and, my favourite,

we were allowed long, hot showers. I was looking forward to it all day. A shower

more than 2 minutes long, not having to turn the taps off while sudsing up,

being able to stand and soak. But you know what, I couldn’t do it! And I wasn’t

the only one. Try as I might, rational reason that there was, I couldn’t keep

the water running while washing my hair. I just couldn’t watch all that fresh

snowmelt go down the drain even though I knew it was headed that way anyway.

in there until my fingers went wrinkly. The start of the winter was marked by

our melt-tank party, the end by long showers. This for me is still the ultimate

On Friday night our clocks went back by three hours. Three extra hours in

bed! Halley is fairly close to the meridian so GMT actually suits us fine and

there really is no need for us to change clocks since we have continual light.

We change for logistical reasons, to be in synch with Rothera and the ships,

way. It doesn’t affect me too much but I know the met-folk who have to launch

GMT are less than pleased! Anyway, the special thing was the extra three hours.

here, I’ll tell you about the really extraordinary thing that happened. A tourist

ship popped by! No, really. The first one ever. And not just any old ship, this

ship has zodiacs and helicopters (yes, plural) and as far as I can tell is stuffed

full of rich fat americans. It’s a terrible stereotype but I’ll be able to tell

you the truth of it in about an hour. The organisers of the tour have been great,

I can’t fault them, they’ve invited us to the ship, offered to fly us there

even and put on a barbeque for us, anything we ask. BAS said no but only after

lots of excitement and anticipation had built up as you can imagine. Something

in arguments around health and safety. I don’t fault or begrudge anyone along

the line but really, this is an unprecedented opportunity. I went to the airstrip

look around. Climbing out is one of the hardest things I’ve had to do all year

("no-one will miss you for a couple of hours will they", Danielle,

the South african expedition leader, asked with a wink). No, they wouldn’t,

and I could. It’s just a sign of what a great winter we’ve had, and how much

resepct I have for Russ, our winter base commander, that I didn’t. And no-one 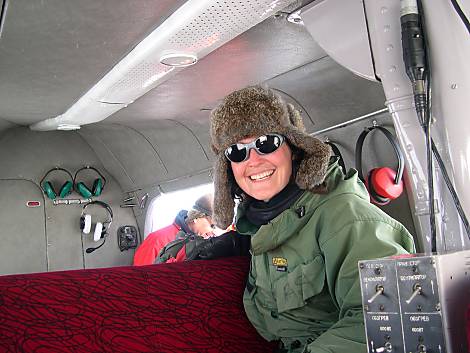 The next day we had a hundred yellow jacketed toursit on base. One asked me

if I felt like an emperor penguin,- all that solitude and then all these cameras

and tourists? As vivid as an imagination as I have, I must admit I had no answer.

any females in any of the winter photos on the wall that date since 1958. I

so you wouldn’t be able to tell the difference. He replied "oh, really?".

But there were rays of light as well. The first dear I met was 83 (41 years

my most loved relatives. She was petite and spritely and inquisitive, interested

and so alive. She held my hand and kissed my face and asked really good questions

and told me about having to pee into a bottle when she went ot the South Pole.

(not a unrealistic assumption at $25,000/month) but rather had almost all been

on several similar crusies previously, if not every year since retirement.

pages filled in. The first was dated December ’99 from the "first ever

2000 by three tourists who arrived by plane between Rothera and ‘Blue One’.

The third was February 2004, the Argentines who arrived by helicopter last summer.

We now have five more pages filled with autographs – thirty-eight in all,

representing the hundred odd folk who came through. They all seem happy to have

come here, they all know it’s something special. My favourite says: Having worked

in isolation myself, may I observe that you do not need to be crazy to work

in a place like this, but it certainly helps.

We didn’t get an amazing jolly, it’s a shame, but we did get fruit. Oh yeah,

personnel who have since stayed. I guess they were expecting a fanfare welcome

but instead they just got shimmied along with the masses. Winterers are supposed

folk who speak to us in monosyllabic words and absorb rants like sanitary pads.

I prefer our method – a hundred tourists, a box of wine, a fresh apple

in the morning and many happy, if bizarre memories. If that doesn’t wake you 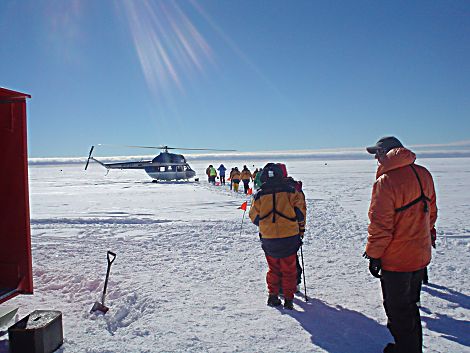