I got fried today. Toasted, roasted and turned on a spit. Or at least my face

did. For a team of caucasians who haven’t seen the sun for six months, and,

when they have, have had every inch of flesh covered, I didn’t think we were

that pasty. Before today. Now, as I glance in the mirror on my way to the shower,

I see black hair (freshly dyed, it was faded orange yesterday) above a bright

yellow-white. Another example of how few comparisons and benchmarks we have

here. There is no perspective.

I visited the penguins again today, thousands of them cooing and trilling,

so many that an entire ice cliff was grey with their shadow. The same feeling

though: I have no perspective. The first time I saw an Emperor I was over-awed

by its majesty. Now, as my friend so succinctly put it, visiting them is like

going to the park to feed the ducks. Very pleasant – but surely there’s 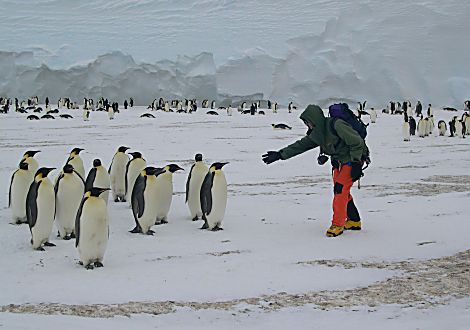 Perspective did however visit us on our return to the cliffs, in the form

of a rogue Adelie. Scurrying about the ice, he was a mucky scruffy little thing

but I love Adelies cos they make me laugh. I can’t look at one without hearing

the clown theme-tune in my head. And next to this little buddy, the Emperors

stood tall and proud again, magestic. I guess we all serve our purpose on this 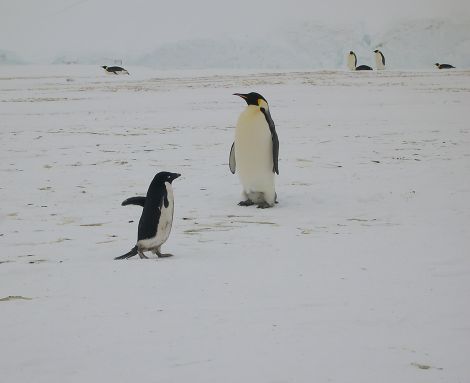 while we walked among them. The abseil access point is perhaps 800m from the

to meet us. Usually a handful of adolescents sliding on their bellies. Once

we’ve reached the sea ice, they then often wander back to the crowd with us.

Last time, I remember just one stayed behind near the bottom of the rope. He

interest and wandered back. Not to worrry; they picked him up again when they

escorted us back an hour or two later. [In this aspect I feel a strong affinity

with penguins,- my attention span is now so short and distraction by shiny things

so compelling that it has pretty much become part of my persona here. Hmm, I

must tell you about melt-tank someday.]

Anyway, you can see for yourself the line that had formed by the time we returned.

They really are sheep. Metaphorically… though I do like the idea of furry

penguins that bleat. The reason why they find Halley every year is because they

relative. I believe this entirely now. 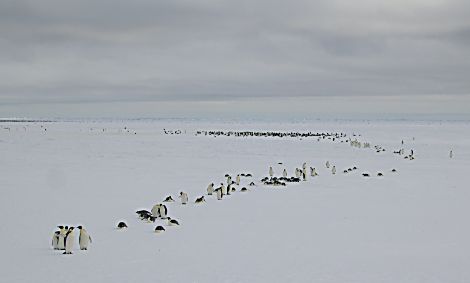 All in all, we had a lovely day at the sea-side. There was unfortunately no

candy floss or pub to warm up in but I did at least pick up some colour. And

before you chastise me too much for being a fool, yes, we did take sunscreen

Oh, and here’s a map for Stefan: 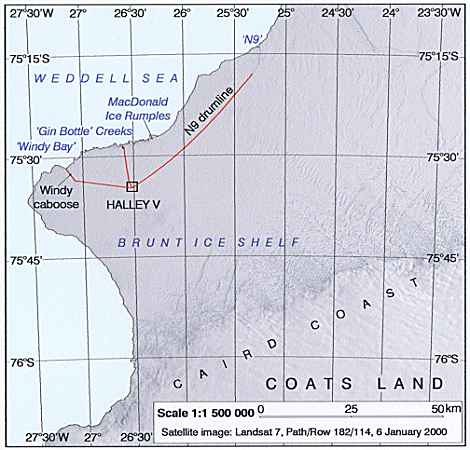