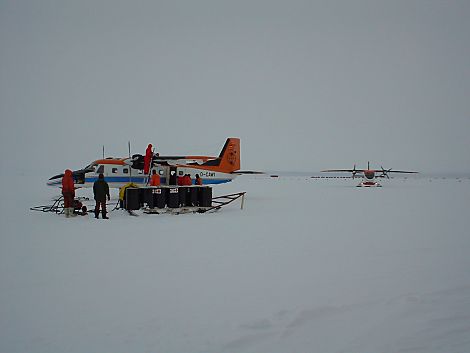 Yes, its true, it’s true, it really is. And you had to hear about it from someone

elses web diary! Apologies. The winter is officially over; we’ve had our

wonderful to see mail… strangely normal, just right, and then they left.

two pilots and an engineer on their way to the German station, Neumayer. We

planes would have come in similar conditions, especially considering what great

weather we’ve been having lately.

Anyway, they flew from Punta Arenas to Rothera on Friday (6 hours?), Rothera

about three hours later. Suddenly made me feel very close to the rest of the

world, very accessible, not at all isolated. And I missed the comfort of isolation.

It is over. Have we been this accessible the whole time? Was the darkness just

on our imaginations? No, I reminded myself, no, we were inaccessible, it is

remote, in the winter Antarctica is twice the size it is now and the sea ice,

darkness and temperatures would make it nigh on impossible to visit. Phew. I

the reality of reality quite yet. Soon, but not yet.

Where was I? The Dorniers. Ah yes. Yes, it was exciting. We all bundled off

to the skiway, the skiway that has been created in the past few weeks. Drums

have been laid as a runway, a caboose fired up for the air mechs and poor old

for weeks it seems. And then someone pointed to the sky. There it was, just

like a toy plane. It was a toy plane! Low contrast and lots of whiteness around

us meant it really looked like you could reach out and pick it up. No perspective,

remember? Then we heard the buzz just before it dropped out of the sky and stopped.

At the second drum. Gareth was not amused! Plane number one tootled off to refuel

and plane number two eventually appeared. This one seemed to confuse which drumline

was the skiway to start with and we thought he might land on the Laws by mistake.

But no, around he came, lower and lower, a beautiful descent and long cruise

past 10 drums before turning off. Much better. My favourite part is when the

pilots or passengers wave to you while still in the air. It’s all so close!

After the whirring stopped they all climbed out, smiling and friendly. A box

of bits, a bag of post, stories of the other world (nothing has changed) and

then huddle off to phone Neumayer and discuss matters of import. We had flown

the flag, made the beds, prepared for a party.. but no, they were going to try

and continue on to Neumayer that night. Fair enough, it was great to see them

By the time they left, I was cold. I hadn’t dressed right for standing outside

not doing much. I was cold, but I was also happy to be cold – it’s been

so warm lately I feared I would never be cold again! I wear the same clothes

as I did the last two summers but am literally dripping, melting. T-shirts under

overalls are now all you need outside. It’s funny to notice yourself change

really, I am melting on my way back from the lab in the clothes I wore last

We came back, we warmed up and ate some dinner. And then to the post. I received

cards, hello cards… lots of smiles, a few happy tears, everyone was a bit

nostalgic that night. And it’s true, when the planes come in, the summer starts,

you know it all will be coming to an end soon… it does change things. In some

ways for the better: there have been more social evenings, more time spent really

we all become that bit lazier, a few more home-truths come out, that extra effort

exerted early on is gone… but it’s ok, it’s comfortable, thankfully we have

a very solid team of winterers this year. Still, the time is coming, I feel

it and to my surprise, I’m ready for it. I’m ready to leave now.

Looking forward to seeing you soon! 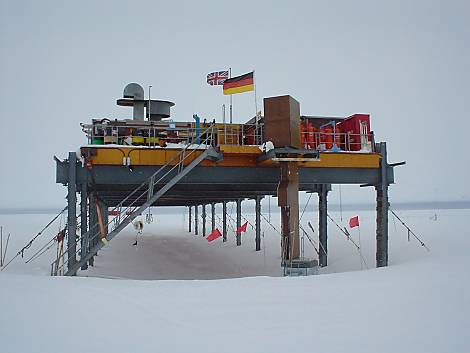 PS Thanks for all the great cards from all around the world!