door. Or, for that matter, touch a handrail before climbing steps into a building.

And then I get a shock, once indoors, when I hang my overalls on their metal

peg in the boot room. The same happens when you pass someone a cup of tea and

but go soft when you get them wet and then stay soft forever? Well here, they’re

always super brittle. Even when you use them every day. Pints of water are a

must last thing at night and first thing in the morning, not just when you’ve

been drinking. Moisturiser and anti-dandruff shampoo aren’t just for girls.

This is the driest place on Earth.

I’ve just come off a week of nights. Blissfully task-free other than the basic

duties of bread, met obs and a little cleaning. My first night-shift in April

was a big deal, I remember, would the bread be acceptable to the boys, whom

do I wake if an alarm goes off, what is the fire drill procedure, how many octres

of stratus cloud are there, is the mirror in the bathroom spotless? This time

round, I remarked only on how easy and wonderful it was. No agenda, nothing

to do but whatever I wanted to do in that moment. (That’s something else I’ve

learnt here,- to lose my fear of boredom. To overcome that guilt feeling associated

with watching a film, reading a book, daydreaming a day away.)

Making bread has become almost normal for us and if it’s rubbish bread, well,

tough… or I’ll make another batch. Met obs are a nice opportunity to go outside

at 3am and 6am. My first few nights were beautifully clear, starry and dark.

We even had a couple of auroras. By 6am, incredible layered clouds, pink, red,

all the buildings look like they’re floating. At the end of the week a storm

was approaching, wind speed soared, snow blew past my face, it was dark and

wild. That could well have been my last week of darkness here; soon it will

be light most of the time, or at least most of my waking hours.

The storm is here now. Forty knots for the past few days but dropping soon

I hope. I do enjoy the wild weather but it is a hindrance to everyone’s work

and you start feeling a bit cooped up after a while. Plus, three people have

trip. On Sunday we decided to go ouside despite the weather. A couple of us

helped dig melt-tank just for the hell of it, it gets you outside and moving

after all, and then we tried putting a pup tent up in a gale. These are the

them in more realistic conditions? I’ll give it to BAS: they are ridiculously

simple to erect, even in a storm. After that we rode Craig’s bike around under

the platform for a while. As you do. Not quite the weather for golf. 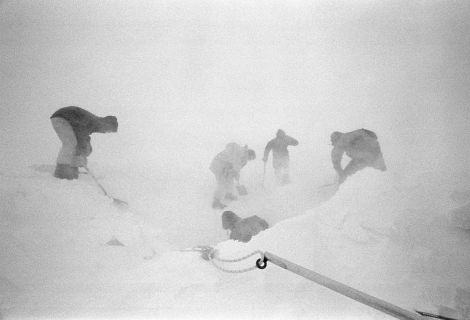 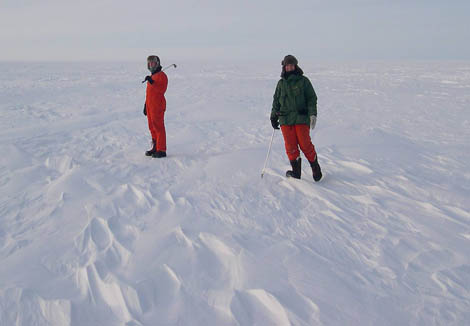 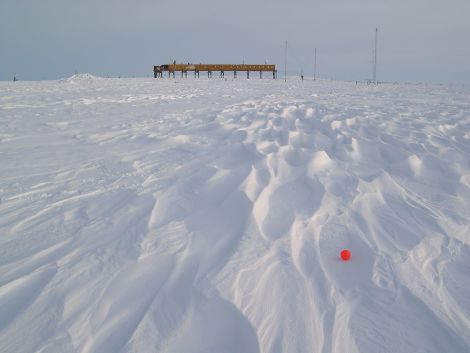 tea bags. No, really, this is serious. Not just a serious fact, but a serious

problem. I actually don’t know what will happen if it’s true. We have apparently

got through over 13,000 tea bags and about 2 tins of instant coffee. Horlicks,

Ovaltine and herbal tea are drunk, but it’s not the same, is it? This is a very

British base after all. During the winter months here, outdoor work is tiring

purely due to the cold. After even 20 minutes outside, you have earned a cup

of tea. And anyone else who’s around will probably join you. Personally, I think

if anything is going to turn us into crisis mode, this is it. I’ll keep you

It’s very bitty. I am dredging my brains to try and think of something new

to say, something you haven’t heard before. A friend wrote to me recently and

contrast, I couldn’t really imagine hers at all. That’s odd, isn’t it? I could

the fact that life down here is incredibly simple and repetitive, there’s only

so much to say and then I have to start saying it all over again. In contrast,

I can never know everything about anyone elses life in the ‘normal’ world. We

don’t even know that of our loved ones, nearest and dearest who we live with

at home or work with every day. We share only a part of anyone’s life. Home,

the person you buy your milk from in the morning. Everything that makes up your

day at home involves so many other people. Your life is a composite of so many

lives. Even if I were to spend a month living with my friend, I’ll only ever

know the part of her life that she shares with me, and only ever know the person

she is when I am around. In contrast, I share most of my thoughts here with

the same people, watch the same films, discuss the same ideas, work with them,

as well. We see different things of course and have vastly different opinions

and backgrounds, but we’re getting to know these as well.

my point is, it’s simple. For me, it’s a happy place, I am very contented here.

There are others I know however who really just want to go home. But still I

at all about yours. It doesn’t matter, I’ll be back in yours before I know it

and can re-experience it all over again. For now, let me indulge in this feeling

of space and ease of living. It can’t last forever but it’s pretty goood for