How many people read Gawker?

Überblog Gawker is running a house

ad between the fourth and fifth entries on its homepage. "SPONSORSHIP"

over 600,000 media junkies in the known universe. But there’s no easy way of

checking: unlike sister sites Wonkette and Defamer, Gawker doesn’t have a Sitemeter

graph up on his personal weblog, charting pageviews per month for all of

the Gawker properties. Here it is: 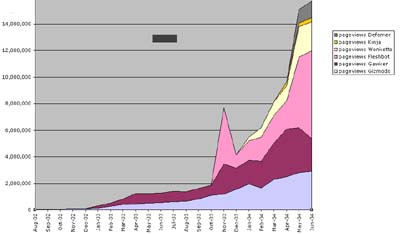 If you’re an ultranerd, you can download the graph, open it up in Photoshop,

and look at it magnified so that all the juicy bits of data are a bit more obvious.

Once you’ve done that, you can use Photoshop’s measure tool to work out approximate

pageviews per month for the most recent month, June. In order of popularity,

Caveat: these are rough numbers, although they probably overstate the real

ones: if you look at Wonkette’s official

stats, for instance, they show just under 2m pageviews in June. But they’ll

do as a rough guide, and from them we can certainly learn a fair amount.

1. The flagship Gawker property has actually seen a substantial decrease

in pageviews month-on-month. This isn’t a reversion-to-mean after a big spike,

either: looking at the graph, it certainly seems as though people are getting

a little bored with Gawker, and moving on to other things – maybe, even,

to a broader Editorial Director role, is it time to juice up Gawker with fresh

blood? After all, the flagship is meant to be the biggest and the best, and

Gawker is now languishing in third place when it comes to size.

2. As suspected, Kinja is nowhere, barely registering on the graph. (It’s

that dark yellow band near the top.) Denton put an enormous amount of time,

energy and money into Kinja, and at this point I think it’s safe to say that

it didn’t work out.

does that make Nick Denton a pornographer? It’s certainly something which

I’m sure he doesn’t stress overmuch during his media

4. Gizmodo seems not to have been damaged at all by the defection of Pete

Rojas to Engadget, and in general the brands are much stronger than the writers.

New York magazine last year: they almost trebled, from about 0.8m in October

But back to the original question: can Gawker reasonably claim that it reaches

here turning pageviews into visits and visits into visitors, ending up with

the conclusion that no, it couldn’t. Then I found this

page, which has all of Gawker’s site stats. And I was right: Gawker had

Even more interesting, that’s the lowest number of the year so far, if you

don’t include Februrary, which seems to be a very weird outlier. The record

May’s numbers. But even if the ad copy was written before June’s numbers were

in, Gawker has never had more than 600,000 unique visitors in any given

month. And at present rates, it looks as though it could be a very long time

24 Responses to How many people read Gawker?