I’ve long had an interest in what was going on at 90-96 Clinton Street, between

Rivington and Delancey. For a long time it was one of the neighbourhood’s better

99-cent stores, before a long demolition job started which carefully left the

façade intact. Weirdly, the façade was then torn down anyway,

and a bland new apartment building went up in its place.

I checked it out yesterday: I’m interested in how the process of gentrification

does or doesn’t affect the quality of new apartment buildings. I expected something

pretty snazzy, since I’d noticed during construction that there were some duplex

apartments – people who pay a premium for higher ceilings generally

In fact, however, 90 Clinton is one of the shoddiest buildings I’ve seen. Everything

and cheaply as possible, and the apartment themselves are almost comically nasty.

The kitchens, especially, are really gruesome: the stoves are electric, with

old-fashioned coil elements (no halogen here, or gas), and in the one I looked

at, the doors to both the cupboard and the oven couldn’t open all the way because

they bumped into the light fixture and another cupboard’s door handle, respectively. 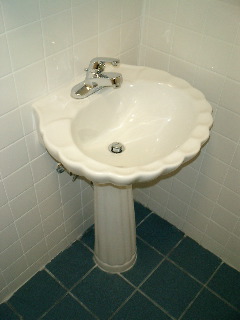 designed to minimise whatever benefit you got from the extra height. Even the

windows are stupid: each double-height room has two air-conditioner sleeves,

one down at room level, and one slightly more than halfway up, right in the

middle of where you want the windows to be. At the back, a rickety wooden staircase

leads up to a dingy sleeping den upstairs, which not only receives very little

sunlight, but doesn’t even have an built-in light of its own. As for the bathrooms…

well, you get the picture.

Of course, as a paid-up Lower East Side ironist, I naturally looked up as I

left the building, to the big sign advertising "luxury rentals". The

in recent years, and now simply means "expensive": the duplexes, with

one small bedroom and one smaller, open loft space, rent for between $2700 and

$2900 per month. By comparison, a proper 2-bedroom in my building, around the

corner, with high ceilings and rooms which all have doors, is currently on

But then I had an epiphany: "luxury" is to developers as "like"

is to valley girls: it’s actually a completely meaningless word, which gets

thrown around willy-nilly when they can’t think of anything substantive to say.

In an attempt to back this up, I’m hereby launching a competition: a free drink

to anybody who can find a new market-rate development in Manhattan, either condos

or rentals, which doesn’t call itself "luxury". Any takers?