I got an email this morning pointing me to an entry

at the Washington Monthly weblog, which essentially excerpted a longer

post by Brad Delong. The heart of the argument is a graph, showing how corporate

profits are going up, as a share of GDP, even as labour compensation is going

down. Here it is: 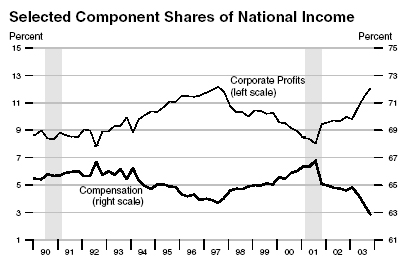 It’s interesting that the compensation line has been drawn underneath

the corporate profits line, because a glance at the left-hand and right-hand

corporate profits on an absolute basis.

It’s also interesting to note the conclusions being drawn from

this graph – essentially, that the economic recovery is not helping real

people, with the benefits going instead to MegaCorp. I would read it very differently.

Firstly, look at the long decline in corporate profits during

fiscal year has two choices. On the one hand, it can declare it to be profit,

pay tax on it, and then distribute the remainder to its stockholders in the

form of a dividend. On the other hand, it can take that dollar and reinvest

it somehow – in equipment, or R&D, or advertising, or acquiring rival

companies, or even giving its workers pay rises.

During the stock market boom, almost no one valued stocks based

on their dividend yield: actually returning profits to shareholders was seen

it came to the new economy paradigm. (Microsoft, it’s worth noting, has never

paid a penny in dividends, despite sitting on more than $50 billion in cash

which it simply doesn’t know what else to do with.) Profits weren’t important:

a rising stock price was. And so companies made sure that they minimised their

money on whatever the flavour of the month was on the stock market that week.

professionals" who were expert at, say, turning a large manufacturing company

into a lean brand-management shop which outsourced all the real work. Technology

salaries went through the roof, and in general, the more you were earning, the

to do with the increase in total employment.

levels. A lot of the people being fired were pretty high up the food chain:

The consequences were entirely predictable. First of all, companies

cut back severely on any kind of discretionary investment, concentrating instead

on the bottom line. Profits, naturally, started increasing, even as rising unemployment

meant that wages and salaries were going nowhere. Then, when the economy started

picking up again, it was suddenly the low-cost workers who were most in demand,

rather than the high-cost workers whom everybody had wanted in the boom years.

As the economic boom continues, things will start changing. Already

the stock market is looking reasonably healthy, and companies are likely to

again. Corporate profits won’t be declared any more, since that’s the most wasteful

thing to do with them: rather, CEOs will reinvest them, increasing GDP growth

mean. Meanwhile, labour compensation in total will be growing even faster than

real wages, due to increased employment and the fact that most of the cheapest

workers have already been hired.

I think, then, that the graph shows pretty much what you’d want

to see in a country coming out of recession: a corporate emphasis on making

money by hiring low-cost workers. That’s both the best way to jump-start the

stock market, and the best way to increase total employment. Once things start

ticking over nicely again, then you can start going back to creating

high-value-added jobs. It’s a simple matter of sequencing, is all.

This entry was posted in Finance. Bookmark the permalink.