New York Times magazine. When I first arrived in New York, it was a vibrant

and interesting book, and its editor, Adam Moss, was justly held in very high

esteem. Moss was then bumped upstairs to an ill-defined role in NYT management,

however, and the magazine suffered; he then left the Times altogether to go

edit New York, and the magazine has now withered and died altogether.

and simple, safe in the knowlege that he didn’t need to shift copies at the

publication comes to the legendary Esquire

covers of the 60s and 70s. The problem is that the magazine’s ego is writing

checks its body can’t cash: the inside of the book simply doesn’t deliver what

story, on "The Tug of the Newfangled Slot Machines". It’s well

teased on the cover: "Neither TiVo nor the Xbox nor your Wi-Fi-ed laptop

is remaking American culture the way this thing is." But the article itself

never mentions TiVo or WiFi, and talks about video games only in passing; in

fact, it doesn’t really address the effect of slot machines on American culture

Instead, what we get is the author, Gary Rivlin, spending 8,000 words wandering

around a company which makes slot machines, marvelling at how rich, clever and

happy the people there are, and how poor, dumb and unhappy their customers are.

At the end of it, we’ve learned essentially nothing that we didn’t know already,

and we wonder, in fact, whether Rivlin really has a clue what he’s talking about.

For one thing, he seems very uncomfortable around numbers. Here’s Rivlin trying

to explain how big the business is:

In its 14-year lifetime, ”Madden N.F.L. Football,” from Electronic Arts,

has made roughly $1 billion, making it one of the most successful home video

games ever produced. ”Wheel of Fortune,” by contrast, takes in

more than a billion dollars each year. … Every day in the United States,

slot machines take in, on average, more than $1 billion in wagers.

Most of that money will be paid back to players, but so great is the ”hold”

from slot machines that collectively the games gross more annually

"takes in". In fact, the one thing we can be sure of is that he means

at least two different things by the phrase, and possibly three. The first,

I think, is profits from "Wheel of Fortune", although it’s far from

the manufacturer of the machine. After all, Electronic Arts keeps all its own

profits, while IGT has to share the profits from its games with the casinos,

and in fact might not keep any of the profits at all, preferring to simply manufacture

and sell the machines rather than attempt to peel off its own percentage.

Next occurrence, "take in" refers to total amount wagered, and is

contrasted to the games’ "gross", which is left undefined, but is

probably the same as what "take in" referred to the first time around.

Finally, "take in" refers to some metric or other at casinos, which

in" in total, since Rivlin never addresses the question of slot machines

outside casinos, and whether he’s including them in his calculations

A bit further on, we find this astonishing passage:

This is a crazy comparison. IGT has a market cap of $13 billion and a profit

of 20.78%. Stock price, as we all know, is only marginally connected to profitability,

successful than it actually is.

But it’s clear that Rivlin doesn’t really like dealing with numbers, as we

can tell when he sits down at a slot machine himself:

gathering credits on every second or third spin. But after about 15 minutes,

I was down nearly 7,000 credits. I was winning the virtual equivalent of 15

playing for real money, I would have lost more than $150.

This only makes any sense at all if by "down nearly 7,000 credits"

7,000 credits remaining. The fact that he uses "credits" interchangeably

with "nickels" only serves to confuse things even more.

I don’t actually blame Rivlin for all of this: he’s a newspaper reporter, and

– which seems to be very extensive – is then turned into a smart,

clear, illuminating magazine article. They clearly failed, and in fact I wonder

if they even really tried.

And the photography in the magazine is going the same way as the prose. This

week’s issue is heavy on the gays, featuring a Q&A

with a transgendered biologist, as well as a long

article about the lawyers who fought for gay marriage in Massachusetts.

Here are the photos of the three; the one in the middle actually takes up a

full page of the magazine. 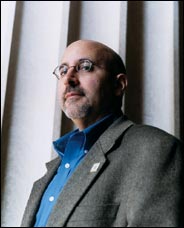 that gays, lesbians and transgendered people can be perfectly normal and boring,

as this. If it wasn’t for a rather good portrait

of New Mexico governor Bill Richardson, the magazine would be at serious risk

of losing its hard-earned reputation as a venue for top-notch photojournalism.

In general, it’s clear that the New York Times magazine needs a good kick up

the keister. Its editor, Gerald Marzorati, needs to start getting seriously

Tina on his mollycoddled employees, tearing up features which don’t cut the

mustard, telling photographers to go back and do better, and generally not accepting

second-rate material any more. This is the one section of the New York Times

which has long lead times and can be expected to be uniformly good. At the moment,

however, it’s uniformly mediocre. Must do better.