I’ve spent a lot of time on this blog writing about a big new Manhattan development.

It features a landmark office building designed by David Childs, and is meant

city – augmented, of course, by cultural attractions. I refer, of course,

to the World Trade Center site, although I could just as well be talking about

So, in an attempt to get a feel for what we might be in for, I ventured boldly

forth to the Upper West Side this afternoon, to check out The Shops at Columbus

Circle (for that is what this mall

urban retail center has been called). As I walked down Central Park

West towards the new building, I had my own prediction

(about the World Trade Center) in the back of my head:

A large number of national chain stores is an inevitability, if only because

there for generations. Judging by the World Financial Center, there might

be a few independent restaurants, but the shops are likely to be pretty bland 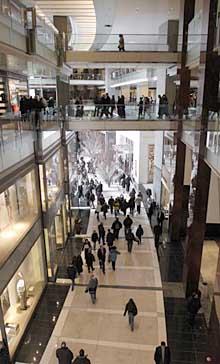 turns out that my invocation of the World Financial Center was prescient. Take

a look at the photo to the left: it’s basically the WFC with catwalks. Inside

and out, the space looks and feels very WFC-esque: there’s the same pattern

of large square windows in steel and stone; the same antiseptic corridors lined

in expensive marble; the same feeling that, basically, you’re shopping in a

high-end office building, or a luxury hotel. Which, of course, you

to disassociate themselves from their hosts – they have different names,

different addresses, and their own dedicated street entrances. Large hotels

and office buildings, no matter how high-end they are, basically work from the

assumption that they have to be all things to all people. The blandness is not

the result of a lack of imagination: it comes out of the necessity of not offending

New Yorkers, on the other hand, have very little truck with not being offended:

if we were easily offended, we would have left this city long ago. What we want

is something interesting, something with character. We’ll try anything once;

if we don’t like it, we won’t go back. But better to err on the side of the

adventurous than to stick to the formulaic.

In such a town, the most successful hotel restaurants don’t look like hotel

districts right now is 14th Street between 9th and 10th, home to the likes of

Alexander McQueen and Jeffrey. It’s hard to get to, it’s convenient for almost

nothing, and it smells of rotting meat. New Yorkers don’t just not mind a bit

of inconvenience: they actively seek it out. Ever since the light-industrial

wastelands of Soho and Tribeca were first populated by loft-dwelling bohemians,

there’s been a sense that grotty beats glossy every time.

This isn’t just a downtown thing, either. New Yorkers love their quirky department

stores, like Henri Bendel, almost as much for their limitations as

despite them. When it comes to shopping, bigger is most definitely not better:

while we might have one of the largest shops in the world, I’m pretty sure that

What’s more, New Yorkers are finely attuned to what is unique and what is not.

Prada store on Broadway and Prince, closely followed, in time, geography, and

sensibility, by the Apple store on Prince and Greene. Beautifully designed,

light-filled spaces work wonderfully in Soho, where they contrast with the older

At Columbus Circle, there’s certainly no shortage of light and space. But there

enclosure: rather, all that you see upon entry is walls, escalators and store

logos. Walking around the building, it’s depressing to note that probably the

end of the arcade on ground level. Visible from the street, the shirts in the

really nothing pulling the pedestrian in to the atrium, since there’s no product

to be seen. Instead, you’re simply pointed to what is where: a bookshop upstairs,

a kitchen-equipment store at the back, a supermarket down the escalator.

A word about that supermarket is probably in order. Yes, it’s big, and yes,

it’s impressive. But it also seems to have been designed by a madman: at the

bottom of the escalator, there’s a food hall behind you, where you can’t buy

food, just sit down and eat it once you’ve bought it. There’s a supermarket

to the left of you, where you get your groceries. And there’s a food court in

front of you, where you get the food to be eaten in the food hall. Then –

and this is the genius bit – there’s a bunch of check-out counters, with

a very incoherent queueing system, to your right. Everybody, whether

at the same place. I tried to get a chicken vindaloo, but rapidly realised that

it was going to go cold by the time I was able to sit down and eat it.

The above-ground levels have similarly bad design: one would think that it

was crucial, in a vertical mall, to have lots of stairs and other means of getting

easily up and down from one level to another. Instead, escalators are placed

at the ends of the arcades, and I didn’t even bother trying to get to the top

At the ground level, things are even worse. Upstairs, at least, the shops seem

to know how to present themselves. But down at street level, the same design

plan seems to have been imposed on everybody, where you have to crane your neck

And nowhere is there any sense of surprise or joy. As Manhattan Users Guide

New York derives a lot of its energy from fresh, absurd, or delightful juxtapositions.

But what do you get when you juxtapose J. Crew and Sephora? Crabtree &

Evelyn with Godiva? (For how to do it right, the planners should have spent

some time in Grand Central.) You could name most of the retailers without

knowing a thing about the place.

Indeed, I might add, you could name most of the retailers just by looking at

the type of shops in the World Financial Center, that epitome of Stepford-style

blandness. And MUG is absolutely right about Grand Central, which is a masterpiece

of well-edited retail and food outlets, with nary a national franchise in sight.

So what does this mean for the WTC site? I fear the prognosis is bad. The original

WTC mall, after all, was truly gruesome: the only saving grace in the entire

site was the Borders bookshop. Other than that, it was The Limited next to Sbarro

next to… well, the fact that I can barely remember anything else, despite

the fact that I used to walk through there every day, speaks volumes. It was

present for the kids on their way home.

The new WTC won’t be as bad as the old one, of course. For one thing, most

of the shops will be on streets, as opposed to being in a contiguous mall. But

if Time Warner starts making money off The Shops at Columbus Circle, I wouldn’t

designs. And even without vertical malls, if the shops are just rented out to

the highest bidders, we’re going to see the same set of nationally-recognisable

franchises, and no sense of character or individuality.

be a vibrant new city district, with streetlife, nightlife and cultural life.

But entire districts are hard to build from scratch: any new development will

inevitably have a certain amount of sterility to it. What I hope is that someone

Central Station, and realise that a bit of central planning can go a long way

in giving an area a personality.

For too long, the west side of lower Manhattan has been devoid of any kind

of positive characteristics. A little slice of suburbia nestled next to the

financial district, it stands in stark contrast to the riotous streets found

east of Broadway. It desperately needs an injection of a little bit of New York

completed, and downtown becomes a coherent whole again. Homogenisation could

creep eastwards from the WFC and WTC towards Fulton and Nassau, especially if

lots of new retail is auctioned off as part of the subway station redesign plans.

Alternatively, the reintroduction of Fulton and Greenwich streets, finding their

rightful way back onto the map after a long and painful absence, could create

a lively new civic center: think the Beaubourg in Paris, with Santiago Calatrava’s

In order for that to happen, the designers of the new site are going to have

to leave themselves open to uncertainty and a little bit of chaos. If everything

is planned and profit-maximised, it’ll just be like today’s Upper West Side

(complete with unimpressive David Childs monolith), only even more boring.