with great pomp today. Grand speeches were given by George Pataki, Michael Bloomberg,

the world has never seen, a skyscraper to put New York City back in its rightful

place as the home of the greatest tall buildings in the world? After all, a

of the skyline. And although this building certainly puts something tall where

(more or less) the Twin Towers once stood, I’m not sure that it really has the

kind of iconic power that the most optimistic of us were hoping for.

The Freedom Tower is not an easy structure to get your head around. For one

thing, it kindasorta torques, which means that its shape can’t be easily described

or conceived. And then it’s basically comprised of three unrelated elements:

an office block at the base, with a latticework structure on top of that, and

finally a 276-foot spire perched on the very top.

It’s designed by David Childs, a competent architect with, as far as I can

make out, no real genius or inspiration whatsoever. In New York, he has built

School Bridge, both very close to where the Freedom Tower will be built; mediocre

buildings like the Bear Stearns headquarters; and, of course, the monstrosity

that is the Time Warner Center at Columbus Circle. This is not the kind of man

who will think outside the box: he more or less invented the box as we know

The base of the building has been evened out from Libeskind’s original, angular

design, and is now a perfect parallelogram, mirroring the street grid around

south, and maybe some kind of extension of Washington Street on the east.

The base is actually the best part of the building, echoing the extra-high

bases of the original World Trade Center.Weirdly, none of the publicity images

really show what’s going on down there, so you’re going to have to make do with

a blurry snapshot of the model I took with my digital camera. The view is looking

north from the Trade Center site, with Fulton Street in the foreground. 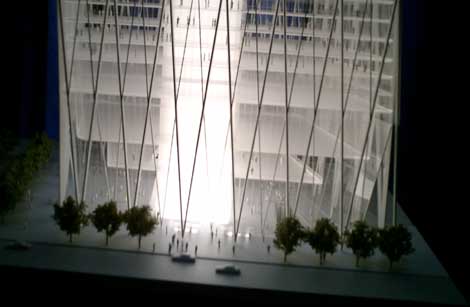 building – where the fire stairs, elevators and whatnot are located –

into a light source. So it’s that much more difficult to tell what the building

is actually going to look like when it’s finished. What you can see, however,

is that the entrance foyer is going to be pretty spectacular, complete with

structural triangular entrance elements in place of the curved elements from

continue looking at the building from this perspective – from the south.

As it rises, the south facade becomes narrower, with the left-hand (west) wall

going straight up, and the right-hand (east) wall moving in towards it. The

north and south facades are perfectly vertical, and don’t torque at all: they

simply narrow. Meanwhile, if you’re looking straight towards them, the east

and west facades kind of fall backwards on their left-hand sides, while remaining

perfectly straight and vertical on their right-hand sides. That’s the

torquing you’re going to hear so much about.

The picture on the left is a view of the south and east facades. Because of

all the light and transparency, it’s hard to tell what’s going on. But essentially

what you have is straight, vertical walls on the left and right edges of the

picture (the southwest and northeast corners), and a torquing, falling-backwards

wall in the middle (the southeast corner). The whole thing is complicated by

grid which helps add rigidity and redundancy to the overall building structure.

all, but weave in and out a little to incorporate the movement of the grid.

You got that? Because now we’re going up, to the top of the office block, what

meeting rooms, and – in another nod to the original towers – Windows

on the World restaurant. The new restaurant won’t just have spectacular views

of both rivers; it will also have a glass roof, so that you can look up and

admire the latticework trellis above.

crown has an angled top, with the high point at the northwest corner, and the

low point at the southeast corner. The idea is to complete Libeskind’s spiral

of skyscrapers, the tops of all of which tilt inwards towards the center of

the site, as if in homage to the void there.

And in fact the experience of the crown should be fantastic. You won’t be peering

through narrow windows, like you had to in the WTC: rather, there should be

Liberty up past Central Park.

of the spire at the top of the trellis. The spire is at the southwest corner,

not the northwest corner, which gives it a tacked-on, ill-fitted feeling. The

spire should rise naturally from the building, continuing the base’s tapering

motion. Instead, while the base of the building points north, the spire drags

the eye back to the south. From the north and south, it’s not too bad, and from

the east, the view is going to be largely occluded by other towers which are

going to be built next to the Freedom Tower. But you’re not going to see many

view across the river from New Jersey, with the World Financial Center in the

crown and the spire is most glaring. If you want, you can get some idea of what

I’m talking about by downloading this 488k

QuickTime movie of the view from the Hudson.

the crown is the trellis, arranged around two broadcasting masts which emerge

from the building’s core. The trellis continues the diagrid of the main building,

but instead of being under compression, it’s made of cables which are under

tension. Childs makes a big show of talking about how this echoes the construction

of the Brooklyn Bridge, but I’m not entirely sold. I’m sure he’s right that

the trellis relieves the weight of the building, and adds redundancy to the

structure should any of the supporting columns fail. But the way in which the

cables hold the building up isn’t beautifully obvious, like it is in the Brooklyn

Bridge or any given structure by Santiago Calatrava. In fact, if it’s reminiscent

of anything, the trellis brings to mind the Eiffel Tower – something which

is made up of beams under compression, not cables under tension.

Attached to the broadcasting masts are a bunch of windmills, which will provide

a chunk of the building’s energy needs: a nice touch. And then, stuck onto the

Childs is unclear about exactly what sort of form the spire is going to take:

according to the LMDC press

release, "it is intended that an artist will collaborate to design

the spire with the architects and the engineers, placing a sculpture in the

sky". But as it stands, the spire is simply plunked down on top of the

trellis, with its base not even extending as far as the southeast corner, where

it could naturally continue the torqued line of the rest of the building.

Center site, it seems pretty clear that, in this case, what we see is what we’re

going to get. Larry Silverstein has committed to laying the foundation stone

by September 11, 2004, and having the building ready for occupation in late

have dodged any of the inconvenient parts of Daniel Libeskind’s vision.

skyline. That’s a good thing. But many architecture junkies, I think, will retain

overall form: something unified, something better.

51 Responses to The Freedom Tower