It was hailing when we got to the Falklands. Really hard. Then snow, sun,

rain, sleet, you name it, all within the hour. “A cross between Dartmoor and

the Scillies”, “like Scotland but with penguins”, “Bryher with more rust”, “Landrover

mecca”, “bizarre”, and other first impressions. By the evening, we’d stopped

noticing how odd it was to be in a very familiar place. The beer, the products,

the language, currency, even the familiar faces. Stanley was overrun with BAS

employees waiting to go South, held back by poor weather for weeks.

The James Clark Ross was also in town, waiting for cargo that we were

carrying. I was fortunate enough to have blagged my way onto a trip

organised by the JCR doc, Emma. She had a mission to accomplish and I was

honoured to be invited.

Back in the sixties, a young man came upon the opportunity to work as a

travelling teacher in the Falklands. The journey from Britain took months:

six weeks from Montevideo alone where we took three days. He arrived on a

barren island and was given a horse. For houses not accessible by

horseback, he was flown in and spent weeks to months living with each

family that had children. After three years, he returned to the UK and

worked in a range of socially active jobs. He travelled. He lived. He had

an Alvis Grey Lady. He had a beard when he was younger. He looked like he

could be your grandfather, father or uncle depending on your age and his

age in the photo. He lived life to the full.

When he died, last January, his last wishes asked that his ashes be

scattered off the jetty at Port San Carlos, East Falkland. A friend of a

friend of my friend’s friend’s boss knew his wife. And so it was that we

found ourself in a tiny japanese 4WD, lost, having missed the only other

road that leads out of Stanley, with a cardboard box at our feet that had

been lovingly carried all the way from the UK by ship.

“Tolkeinesque,- this is the last valley before Mordor.” The landscape was

tussock grass. Very windswept. And water on all sides, there were so many bays

and inland waterways that I was never sure which way the open ocean was. In

some places, a rich turquoise bay, then around the bend, grey and wild sea.

Four seasons and ten landscapes in an hour but always barren and British, in

the most beautiful way possible. 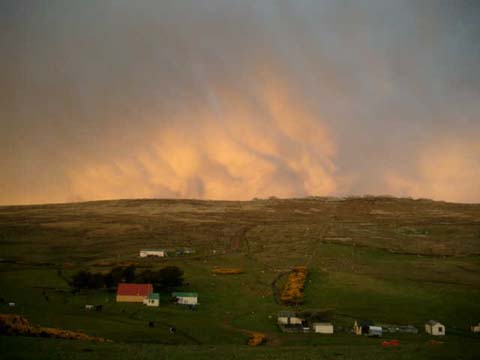 Port San Carlos itself is gorgeous. There are three houses and an old jetty.

A walk to a memorial stone brought us hail, snow, sun and much wind. We hid

behind a bush while the weather passed. Gorse that smells of honey. In the evening,

the sunset made you want to sing, or cry, and laugh, dance, inhale deeply, take

it all in. It was so huge, immense, the skies here change so quickly that they

light. A bird flying against dark skies, illuminated white from beneath. Horses

and sheep in our garden. A bed, a real bed! Great company, a pack of cards,

plain food that we made ourselves, water from the ground, peaty. I felt nourished

and refreshed. We drank it all in.

The farmer owns thirty-two thousand acres of land and has seven thousand sheep.

Over here, you talk in acres per sheep rather than the other way around. One

the penguin colony. Serious cross country for a good hour through every weather.

This country may look small on a map but it feels huge and endless, uninhabited,

when you cross through it. Five hundred gentoo penguins nesting in tussock grass,

the sound of purring and chirping, the smell of ammonia. Sheep, cattle and geese

but a hallucinatory dream. Wobbly legged lambs next to freshly hatched penuin

chicks, in a hail storm. 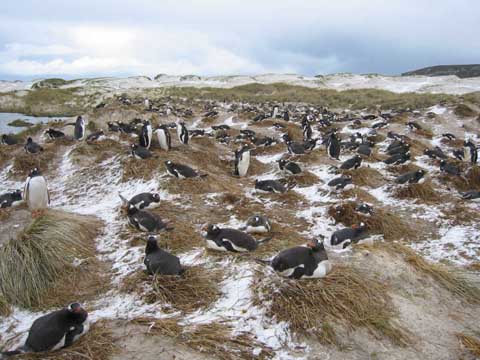