When I posted an entry

on 2 Columbus Circle last month, I said that "The lack of windows gives

it the feel of a prison: you imagine yourself stuck inside, unable to look out.

It is an exercise in claustrophobia, and the new design [with lots of glass

and light] constitutes a vast improvement." I also said that "the

mood in the city these days is that brand-new buildings are usually pretty good". 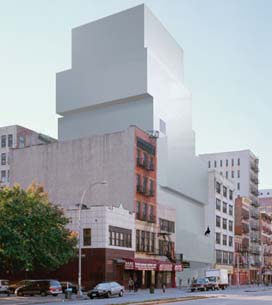 I spoke too soon. Lockhart Steele has gotten

himself a press kit for the new New Museum building, which is going up on

the site of what is now a parking lot across from Prince Street on the Bowery.

of the past, it seems determined to make every old mistake in the book all over

of rectangular boxes, each with a different height, shifted slightly off axis

in different directions and clad in textured, galvanized zinc-plated steel".

The point of all this architectural cleverness, it would seem from reading

is to ensure that the building doesn’t have to bother with windows at all. After

all, they explain, "SANAA’s concept for the site proposes a series of shifting

sculptural boxes that allow for skylights on every level". And who needs

windows when you’ve got skylights?

places with great views, like the Tate Modern or Dia:Beacon,

use their windows to fantastic effect. The problem is not so much how things

feel on the inside, since with sunlight from above and intelligently-designed

lighting, the spaces will probably work perfectly well. Rather, my issue is

with the way the museum presents itself: it looks to the world like a dark fortress.

Added to the windowlessness is the problem of scale: the museum is going to

tower over its neighboring buildings without any attempt to integrate itself

building. There is no chance that the local residents are going to embrace this

building; rather, they are (rightly) going to consider it an eyesore and a bad

Here’s what the architects have to say on the subject:

surroundings. However, our building has to accommodate a much bigger program

than its neighbors do. By shifting the different levels of the structure in

relation to one another, we are also diminishing the bulk and establishing

a more effective, dynamic relationship with the buildings in the area. On

the other hand, because this area is in transition, we believe the New Museum

building should have a strong identity of its own in order to survive, especially

than a neutral "demilitarized" zone between neighborhoods that have

This is gruesome stuff. I can’t for the life of me think how the shifting levels

the area, none of which have any shifting levels at all. As for the idea that

"tough" street without a "distinctive personality" –

this is simply crazy. Architecturally, Nolita and the East Village are very

retail on the ground floor. The Bowery is much the same, enlivened by the Bowery

Mission and by the competing signage of the restaurant-supply and lighting shops.

It has a very strong and distinct character, none of which is reflected in this

that it was moving there, it made a big song and dance about how happy it was

of September 11. Of course, Prince and Bowery is a world away from Lower Manhattan,

and many of us, at the time, thought that the New Museum was clearly trying

The rhetoric surrounding this building is similar: a Japanese architectural

firm comes up with a "bold" design, and then pays lip service to the

neighborhood, despite the fact that they obviously couldn’t care less. This

building would be equally ugly anywhere, but it certainly doesn’t belong in

In fact, it feels like nothing so much as Marcel Breuer’s Whitney

Museum, complete with windowlessness and cantilevered upper stories. The

only difference is in the cladding: zinc-plated steel as opposed to concrete.

No, I have no idea how or whether zinc-plated steel will age on a street full

of belching trucks rumbling to and from the Manhattan Bridge. Breuer’s building

is not well loved, and even architects generally admire it more as an important

piece of avant-garde 1960s architecture than as a perfectly-formed

its present location on Broadway without even noticing them, and decided that

in their new digs they were going to make a splash. But it would have been nice

if they did so by commissioning something beautiful and interesting, rather

in Birmingham, the new

Selfridges has opened, and it, too, has no windows. Here, rather than a

neo-brutalist tower we have a biomorphic alien spacecraft. Both, however, are

primarily illuminated by skylights, and utterly fail to even try to fit in with

Now I’m no curmudgeon who hates all new

interesting. But if you’re open to the possibility that contemporary architecture

is good, you also have to be open to the possibility that it’s bad. And as a

rule, buildings without windows are bad buildings. (Of course, there are truly

great exceptions to the rule.) So just because a department store don’t

need windows, doesn’t mean it shouldn’t have them. Indeed, department

despite the fact that it’s almost 70 years old.

It’s a psychological thing. When we look at a building, we naturally imagine

ourselves inside it, and no one wants to live in a building without windows.

irrelevant: when we’re simply looking at the outside of the structure, we want

to be able to look in, and, more importantly, we want the people inside to be

able to look out. It takes some kind of architectural genius to make us get

over that initial repulsion, and neither of these two buildings – nor

2 Columbus Circle, for that matter – has it.