Sunday is clearly the day for long-windedness in the New York Times. The paper

leads with a 9,500-word investigation

of the Lackawanna terror case (don’t ask me), complete with a 1,300-word kicker.

barely-coherent words by Tom Wolfe on the subject of 2 Columbus Circle,

Tom Wolfe, of course, is the author of From Bauhaus to Our House,

one architecture book, or of people who don’t know much about art but know what

they like. Still, the book is deservedly popular: while Wolfe can be wrong-headed

a lot of the time, he’s also a great writer, and lots of fun to read.

He was a great writer, anyway. Back in the day, he could construct

265-word sentences which were masterpieces of virtuoso journalism. Nowadays,

as his op-ed shows, he seems to be of the opinion that any 265-word

sentence of his must, perforce, be a masterpiece of virtuoso journalism, with

challenged" babble, to use his own favourite term of abuse.

Wolfe is also much better when attacking architects than when defending them.

The point of the op-ed, one assumes, is for Wolfe to throw his weight behind

and keep it more or less as is, albeit both occupied and safe – neither

of which it is at the moment. The alternative, against which Wolfe spends much

time wailing, is a plan by Brad Cloepfil to basically rebuild the structure

as a new home for the Museum of Arts and Design, completely revamping it inside

Here’s the building, as it looked when it was first built, as it looks today,

and as it is proposed to look after the refit. 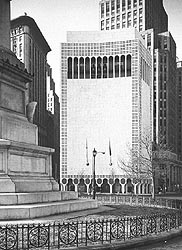 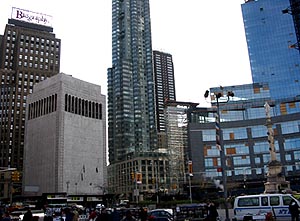 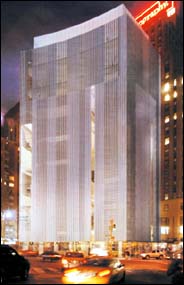 is that the building was never all that good, and the arguments for its preservation

Robert A M Stern, of the Yale architecture school:

New York is where orthodoxies are challenged by new ideas. Two Columbus Circle

was just such a challenge, and it clearly challenges us to this day. Its provocations

are as important now as ever. It was and is a pot of paint flung in the face

of the high Modernist establishment. For this reason, if no other, Two Columbus

Circle must be preserved intact for future generations to enjoy, consider,

debate, and learn from.

The building must be preserved, if only because it’s provocative? This is the

is one thing. But preserving provocative buildings is another thing entirely.

The fact is, the kind of people who love From Bauhaus to Our House

a hideous eyesore. This building is one of the few things on which both die-hard

you feel when you look at it in real life. It’s a tall building, even if it’s

not as tall as the skyscrapers which surround it, and the vast majority of its

height is simply a vast expanse of crumbling blank stone, with no features at

all, redeeming or otherwise. The lack of windows gives it the feel of a prison:

you imagine yourself stuck inside, unable to look out. It is an exercise in

claustrophobia, and the new design constitutes a vast improvement.

Wolfe’s op-ed appeared on the weekend of Open

buildings around the city are opened up to the public. I went to a few, and

would loved to have gone to more, except a lot of them were booked out very

early and in any case I was busy on Saturday with a wedding to go to.

enthusiasm for new architecture, and that there’s lots of very cool and interesting

Washington Park, or the Tweed Courthouse, or the Washington Square arch.

Still, I’m pretty sure that the mood in the city these days is that brand-new

buildings are usually pretty good. Places like the Hayden Planetarium are instant

classics, and although there are certainly some dull office buildings under

construction, the knee-jerk public reaction against nearly all new architecture

is a thing of the past. Think to yourself: if you heard that your local train

station or airport was being rebuilt, would you be happy or sad? Happy, I think:

such projects are nearly always improvements, these days, in contrast to the

Circle and decide that although it has many failings, it must surely be better

to preserve it than attempt to create something better. To have that mindset

is crap, and that as a rule the past is going to be better than the future,

architecturally speaking. That kind of defeatist attitude is not the kind of

should retreat to his wood-panelled study on the Upper East Side, and leave

the rest of the city to the people who will inherit it with enthusiasm.