It’s been over seven months since Daniel Libeskind was officially

chosen as the architect in charge of the World Trade Center site, and a

lot of us have been wondering what, if anything, has been going on. Well, today

we got our answer: a lot, and it’s pretty much all good. Contra Eward

reporting last week, the changes which have been made since February are

nearly all for the better, and we have now moved, as Kevin Rampe, the CEO of

the Lower Manhattan Development Corporation, said today, "from a great

vision to a great plan". 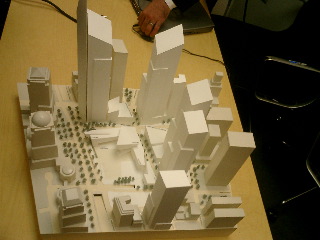 most important element of the revised

plan –I took a photo of the model, which you can click on for a bigger

the Bankers Trust building) is no longer in question. That land is needed and

will be taken – negotiations with Deutsche Bank are ongoing,

domain if necessary. Added to that, a small parcel of land next door, which

parcel which, it turns out, is vital for all manner of reasons. At the moment,

between Greenwich and Washington. In the new plan, the L will be cut the other

way, with Cedar Street restored, creating a large park to the south of the World

Street, which currently runs all the way to Liberty Sreet, will now stop at

a new Saint Nicholas’ Church more or less where the old one used to be. Otherwise,

however, the new two-block-long site will be largely empty: called Liberty Street

Park, it will be a place to sit and relax near the new office towers, close

to but not part of the memorial across the street. The really interesting stuff

For the reintroduction of Cedar Street creates a new city block between Cedar,

Greenwich, Washington and Albany, all of which will be taken up with a new tower

out over much more space, giving the new towers a bit of breathing room, and

allowing small floor plates. What that means in practice is that the towers

are more commercial, since it’s easier to rent out more smaller floors than

it is fewer big ones; it also means that they don’t read quite so much as a

The initial spiralling design remains; indeed, the addition of a fifth tower

(which was actually in Libeskind’s plans all along, albeit not quite as far

rooftops, from the 57-storey new building slowly up to the 70-storey office

1) itself remains unchanged in Libeskind’s imagining, although there will surely

be a lot of negotiating between him and the architect, David Childs. Everybody

is adamant, however, that the symbolic 1,776-foot height will remain, as will

the off-center spire designed to echo the torch of the Statue of Liberty.

smaller, the revised design has much more freedom to play with their placement

on their city blocks. They can now spriral out, away from the recreated Greenwich

Street, with Tower 4 taking up the south-west corner of the block between Greenwich,

role in the new plan: it now extends, as a pedestrian shopping precinct, all

the way to Greenwich Street. The narrowed-down Tower 4 leaves a lot of space

department store, or any other kind of anchor tenant that the new retail developer

The new plan takes full advantage of the fact that Westfield America, who had

the rights to run the new retail space, has now pulled out entirely, being bought

off, essentially, by the LMDC and the Port Authority. Westfield specialises

in mid-Western shopping malls, and was adamant that it wanted large amounts

11. That was never going to happen, but Westfield was always a major thorn in

Libeskind’s side, and its departure from the scene is a great relief to everybody

who has high hopes for this project. Now, a lot of the retail space is arranged

vertically rather than horizontally: going down to the concourse level of the

new train station, and going up two or three stories from street level.

To the north of Cortlandt Street, Tower 3 is nestled next door to just that

train station, basically on the corner of Church and Dey. While Tower 4 sits

movement to the spriral. Again, there’s space for large-floor-plan retail between

Greenwich Street and the new tower, which should be easily incorporated into

the station, which is being designed by the great Spanish architect Santiago

which is now actually slightly larger than it was in February. On the other

side of this great public plaza, Tower 2 stands right on what should be one

of the greatest crossroads in the world: the corner of Fulton and Greenwich,

September 11 Place. Because Greenwich Street is not north-south so much as northwest-southeast,

Tower 2 is well to the west of Tower 4, and brings the spiral back towards the

great Tower 1 over on West Street.

But back to Liberty Street Park: what’s going on underneath it is actually

more important than what’s going on to its south. Office buildings need truck

access, you see, and there simply wasn’t any way to build secure truck ramps

be upheld, and nothing – not even an underground truck ramp – could

be built on the footprints of the Twin Towers. So now Liberty Street Park is

essentially a pretty, green roof for a massive truck-security operation which

loop. It’s crucially important infrastructure, and an elegant solution to a

that the Port Authority is a central player in this process: while in general

increasing the number of cooks tends to spoil the broth, no one’s really talking

at the moment, to take a back seat and let the LMDC and Port Authority do most

of the heavy lifting. That’s probably wise: the single most important person

in the whole scheme remains George Pataki, and there’s no point stepping on

his toes and telling him how to do things at this stage.

control of the Deutsche Bank site, this plan really looks as though it is actually

going to get built. It’s expensive, of course, and the chances are that West

Street will not be buried underground despite desperate attempts by Libeskind

and the LMDC to get the funding to do that. The Freedom Tower will be on West

Street, where it makes architectural sense, and not next to the train station,

where Larry Silverstein wants it; the rest of the towers, so long as they’re

basically the right height, shouldn’t pose much of a problem.

look like, of course, and if that turns out to be a big and ambitious scheme

then chunks of the site plan as it presently stands could well change substantially.

Especially in the area of the footprints, the present scheme is extremely vague,

to give as much freedom as possible to the memorial designers. The exposed slurry

wall will certainly remain; the waterfall on the south-east corner of the site

probably will; and the rest is completely uncertain.

But even ignorant of what’s going to go in the middle, it’s clear that New

York is going to have a vibrant new downtown, complete with a set of new skyscrapers

which actually work – instead of compete – with each other. Anybody

and the spirit. Today, I’m more confident than ever that such a thing can happen