DVD is a great medium: there’s a virtually limitless list of films available,

they look much better than they do on VHS, and you can do things like freeze-frame

much more effectively. But until now, the market has been dominated by the major

theatrical distributors. If you want to rent a movie which came out in theaters

for a couple of weeks and then bombed, that’s easy. Everything else, on the

other hand, is almost impossible to find.

There are three types of DVD I’ve long wished to be able to find, with very

or Bruce Nauman to feature-length films by Andy

It’s understandable why these films would be difficult to find, however:

and a generally available perfect copy would severely dilute the edition.

The second is made-for-TV material, especially documentaries. There are amazing

documentaries out there, but most of them appeared once or twice on television

and have since become all but impossible to see. Much more effort goes into

making a good feature-length documentary than goes into writing a magazine article,

but future researchers on any subject are generally confined to the latter,

because the television material is stuck, inaccessible and unindexed, in a basement

The third is music videos. On a dollars-per-minute basis, these are probably

the most expensive films regularly made, and enormous amounts of effort and

creativity are put into them. Yet very few make it onto television, and even

fewer are available once the single in question is no longer in the shops. Real

exist largely in our memories these days: we can’t rummage around among old

DVDs for them in the same way that we can with our music collection.

(I could add a fourth category here, of television commercials, but while they

can be very clever and funny, I personally have no particular desire to watch

a whole DVD’s worth of them.)

scene, and who collect pirate copies of such things in much the same way as

people in the art scene have illicit collections of art videos. But these copies

are invariably on VHS. It’s also possible to get DVDs featuring collections

of an individual recording artist’s work. The problem with going down that route,

of course, is that it’s the music which drives the video selection, and not

the other way around, meaning that a lot of the videos are very average in quality.

(One exception can be found here,

But now, thanks to Spike Jonze, there’s a whole new company, The Director’s

Label, devoted to releasing the best work of the best music-video directors.

Better yet, the first three releases, coming out at the end of October, also

happen to be the best three music-video directors working today. The press release,

complete with trailers for each of the DVDs, can be found here. 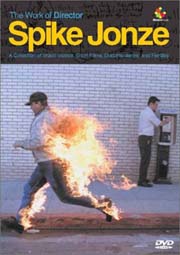 subject of the first DVD, of course, is Jonze

himself. Jonze first appeared on the scene making skateboard videos, but

music-video directors ever. The Beastie Boys started hiring him on a regular

basis: they’re the kind of artists who really care about making their music

videos into self-standing artworks in their own right.

This DVD features all the Jonze classics. The Beastie Boys’ Sabotage

is a hilarious send-up of 70s cop shows, while Fatboy Slim’s Weapon of Choice

Christopher Walken really is. The cover features a still from Wax’s California,

a slow-motion sequence of a man on fire, running, which once seen is impossible

really known for his cutting-edge use of technology. That said, he spent a lot

of effort inserting Weezer into the Happy Days TV show for Buddy Holly,

and did their Undone video entirely in one take. 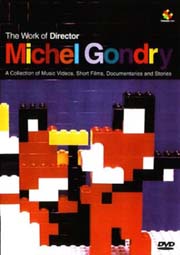 Gondry. Gondry has come to fame more recently, largely thanks to Björk,

who has used him in half a dozen videos. Their first collaboration was on Human

Behaviour, a video which singlehandedly made Gondry’s name with a wonderfully

World. Shot in a Parisian suburb, it shows Kylie dancing and skipping around

a crossroads again and again – and each time she circles, another Kylie

joins her, until there are four Kylies in all. And it’s not only Kylie who replicates,

it’s also the townsfolk, each of whom is a small little story unto themselves.

the dozens of small things you miss the first few times.

But Gondry is more than just a high-tech wizard: consider probably his most

With a Girl. Done entirely in old-fashioned Lego, the very rawness of the

animation pefectly echoes the stripped-down nature of the song, and deservedly

makes it to the cover of the DVD. 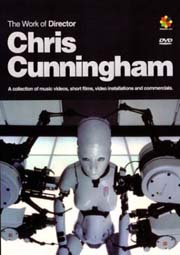 Cunningham. The fact that he’s part of this series at all is particularly

impressive, because he’s considered an artist in his own right, and sells his

work through art galleries. His longest and most expensive piece of video art,

Flex, is actually featured on this DVD, which bodes well for the wider

availability of other artists’ work.

Gondry is associated with Björk, then the Englishman Cunningham is very

much linked with Aphex Twin. There’s a problem here, in that Aphex Twin is not

particularly commercially successful, which means that Cunningham’s videos have

even less chance than most of being seen. What’s more, Cunningham’s vision in

his Aphex Twin videos is genuinely shocking, disconcerting, and scary: these

aren’t simply clever and imaginative works, they’re also the kind of thing which

can give you nightmares.

So it’s Björk who makes it onto the cover of this DVD, since Cunningham’s

he’s ever made. It’s technically flawless, especially considering the technology

which went into it way back in 1999. It’s also stunningly beautiful, with a

I can’t wait for these DVDs to be released, and I’m very much looking forward

to seeing who Jonze will choose to be the next director tapped for a retrospective.

Still, between the three DVDs, there’s 20 hours of material here, so that should

be enough to keep me occupied for the time being.

3 Responses to Music videos on DVD