Most journalists are pretty receptive to arguments about the importance of

intellectual property: after all, we make a living producing just that. But

at the same time, it’s often clear when things go too far. I’ve yet to hear

a cogent defense of the Copyright

Term Extension Act, for instance, which was passed by Congress in 1998 basically

to ensure that Walt Disney retained copyright over Mickey Mouse, who first appeared

in 1928. (Never mind that Walt Disney himself created Mickey from an already-existing

on MemeFirst, the best introduction to IP issues I know is a PowerPoint

to the first part, at the very minimum, before he gets all geeky about the Digital

This isn’t just about what Dan

Gillmor calls our dwindling heritage: old books not being available because

the copyright owners won’t print them and no one else is allowed to. The IP

formulation) and would certainly not allow Brazil, say, to manufacture AIDS

drugs which neither the sovereign nor its population could conceivably afford

to buy from the large pharmaceutical companies. Millions of lives are potentially

at stake here, and while Saturday’s development

at the WTO is a step in the right direction, it’s still not clear just how

much good it’s going to achieve.

What I find interesting are the cases in the middle. We can all agree that

someone selling pirate copies of the latest Harry Potter book is doing wrong,

a couple of clearly-labelled fake ads is not a criminal offense. Marty Schwimmer,

the lawyer who helped me out in the Puma case, has his own weblog, and he’s

much more of an IP zealot than I am: take a look at this entry

of his from Friday. 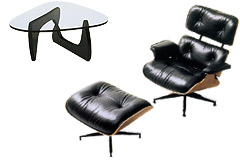 about a Herman Miller marketing

campaign called Get Real. It’s an attempt to get people to buy authentic

Herman Miller furniture rather than cheaper knock-offs, and it centers on two

designs which Herman Miller has managed

to get "trade dress" protection for: the Noguchi coffee table of 1944

and the Eames lounge chair and ottoman of 1956.

loyally, but I’m not at all sure. Take the table, for instance, which has already

it, but how much longer should it be able to do so exclusively? After

all, part of the attractiveness of the design is its incredible simplicity:

two identical pieces of wood, held together by nothing but gravity, with a simple

The Herman Miller table, according to the Washington Post, has a "signed,

3/4 -inch glass top and ‘flawless’ finish on the wooden base," but those

features are ultimately secondary to the conceptual beauty of the piece’s design.

pieces beautifully buffed, but I’m not sure that any number of other companies

and individuals couldn’t do an equally good job. Why not let the people who

want a signed tabletop go to Herman Miller, and allow everybody else to choose

among Noguchi tables made by all manner of artisans and cheap importers?

while this might conceivably be true in the case of drugs, which can cost billions

of dollars to develop, it’s hardly true in furniture, where thousands of designers

are working every day on new designs. Furniture design is not a capital-intensive

business, and large sums of money flowing to the Noguchi estate aren’t going

to make the design world any more innovative.

Good design should be as accessible as possible, and keeping the Noguchi table

at $1,000-or-you-can’t-have-it doesn’t help that cause in the slightest. Besides,

Herman Miller specialises in "authorized reproductions": most of the

time, the only real difference between a Herman Miller piece and a high-quality

knock-off is that the former is "authorized" and a lot more expensive.

Originals – the battered old pieces you see in museums – are another

thing entirely. Unless Herman Miller can convincingly explain why these designs

should remain its intellectual property forever, I think it’s time for the company

Schwimmer doesn’t stop with the Get Real campaign, however: he then embarks

on one of his own, to enact some kind of censorship on the Rocky Mountain News.

That newspaper ran a column

on Thursday about fake handbags, explaining that while the Louis Vuitton’s Takashi

people in Denver alone, copies can be found on the internet quite easily.

for such a thing: it’s very hard to find on louisvuitton.com, impossible to

find on eluxury.com, the lvmh online store, and incredibly easy to find if what

you’re looking for is a copy. But apparently no newspaper should be allowed

to report that: Schwimmer seems to think that knock-offs are so illegal

that even mentioning them, or saying where they can be found, should

be a criminal offense. "I will be surprised if the Rocky Mountain piece

stays online past the weekend," he says: "They are likely to hear

from LVMH, Burberry or Dooney and Bourke by then."

never afford the real thing: I can guarantee you that no one read the article,

discovered that there were knock-offs avaialble, took her name off the Louis

of course, is that if you want the real thing, the copies make it more,

not less, attractive: they’re the ultimate arbiter of which designs are the

Of course, advertisers in the Rocky Mountain News would be well within their

this to which they object. But I see nothing in the article which overrides

the newspaper’s First Amendment rights to publish it in the first place, and

in fact I find it refreshing that something like this can appear in print. There’s

a lot of hypocrisy in journalism: all that’s happening here is that a couple

We’ll see how long the story stays up. But in the mean time, as you’ve probably

noticed, I’m experimenting with a new way of generating revenue from my own

intellectual property. This website has been a help to my freelance career:

subjects, and it’s now a lot easier for prospective employers to get an idea

make money (just a few dollars would be fine) on a stand-alone basis, so I’ve

started running ads down the right-hand side.

The ads are served by Google, and I have no control over what they are: I do

not endorse the websites they’re advertising, and I do not ask that you visit

them. If and when someone clicks on one of the ads, I’ll receive a few cents:

I’ll need about 400 clickthroughs a month to cover my web hosting fees. I’ll

keep you posted as and when I get any money; I’m sure you’ll let me know in

the comments box if you find the ads too intrusive. My hope is that they simply