Malevich at the Guggenheim

Kasimir Malevich has long been one of my favourite artists, ever since I saw

one of his great white-on-white paintings at Annely

Juda as a teenager. There’s a handful of paintings which seared themselves

into my consciousness the minute I saw them: this was one, along with a Van

Gogh in what was then Leningrad, and a Paul Klee in London.

If it was Annely Juda who first introduced me to Malevich, though, it was the

Guggenheim who really helped me to understand his importance: one of the first

big art books I ever bought was the exhibition

ambition after its grand bigger-and-better reopening in 1992. I loved reading

about Malevich, and got very much into the photography of Alexander Rodchenko

at the same time.

show dedicated to Malevich. The Guggenheim knows how to mount well put-together

exhibitions, and, considering its excellent

connections in Russia, there’s probably no institution in the world which

could mount a better exhibition dedicated to Malevich’s most important art.

I got to the Guggenheim, and it was still covered in blue astroturf. The Matthew

Barney show, which I blogged

back at the beginning of April, is staying up until June 11. And no matter how

much you like Barney, you could never accuse him of being quiet and meditative.

Malevich is relegated to a couple of rooms in the fourth floor of the annex,

which are reached directly from the Barneyfied rotunda. No standard gallery

hush here: blaring Barney video installations are never out of earshot. And

I can’t think of an artist who demands silence more than Malevich does.

For Malevich is not like the minimalists at Dia:Beacon, creating human-scale

works which work on a purely physical level: for all his revolutionary avant-garde

fervor, Malevich always remained something of an old-fashioned painter and artisan.

His paintings repay studious attention, rather than hooking you with a conceptualist

gimmick or bowling you over through their sheer scale. 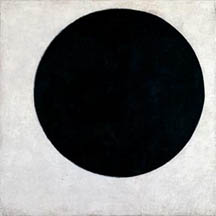 more, many of the paintings are now historical artifacts more than they are

the artworks Malevich intended to create. The single most important piece here

– the Black Square of 1915, never before seen outside Russia

– is cracked and damaged like a dried-out desert floor, with all manner

of constituent colours visible amidst the decay. Malevich would be shocked at

its present condition, and would probably have to be forcibly prevented from

attacking it with a paint brush. So looking at this painting perforce involves

a re-imagining of what it originally looked like, something made much easier

by the presence nearby of the sibling Black Circle, which is in much

better shape. So I would definitely recommend you go see this show; just wait

until after the Barney has come down, so that it’s easier to keep your concentration.

What you’ll see when you get there is concentrated essence of Malevich: the

show begins in 1915, with the quartet of abstract black shapes on white backgrounds,

and ends in 1932, with the death of Suprematism. The four black and white paintings

and Elongated Plane) have not been seen together since 1920, which

same place. It’s a pity they’re not shown together, then: the square comes first,

of the narrow gallery.

They’re stunning, gorgeous paintings, well worth going to see, which lose a

huge amount in reproduction. The brush strokes are thick and impassioned, much

like Ad Reinhardt. This isn’t the less-is-more philosophy of the late 20th Century;

this is an attempt at a universal visual language, full of emotion and without

representation. It’s hard to see these paintings through pre-war eyes, but Malevich

was not trying to emphasise the picture plane, or achieve some kind of ideal

of "flatness". The geometric shapes were pure, for him, to be sure,

but not in a cold, mathematical way: his squares weren’t like Carl Andre’s floor

panels. Rather, the very universality of the forms was meant to allow the art

to speak to all viewers equally: think Rothko, not Ruscha.

Most of the rest of the exhibition fails to live up to the four early paintings:

as Malevich’s canvases became more cluttered and colourful, they also lost a

lot of their directness and power. There is one gorgeous red square, beautifully

framed in heavy black wood, but after that one has to wait until the white-on-white

paintings to really see what Malevich was capable of. In the meantime, there

are not only dozens of paintings which are almost Kandinsky-like in their complexity,

but also architectural models and even designs for tea sets (which, amazingly,

are not available at the Guggenheim Shop).

Overall, it would seem that Malevich is one of those artists who is not particularly

well served by a major exhibition. I’m very glad this show is on, and I’m sure

it serves all manner of crucial art-historical purposes. But really I think

a small, well-chosen exhibit at Annely Juda (especially in the beautiful, light-filled

punch than the Guggenheim’s attempt at comprehensiveness. Everything you need

to see here could really be encapsulated in a dozen small paintings: the rest

is really just distracting noise, if not as unsettling as the Matthew Barney

films banging away in the background.

All the same, I’ll be going back. I think all art shows should be seen twice:

the first time you walk around them dutifully, trying to see everything; the

second time you can pick and choose and concentrate on the stuff you love. I’ll

be heading straight for the black circle, the red square, and the white cross.

And in the background, Frank Lloyd Wright’s pristine white spiral will add to,

rather than detract from, the experience.