It was a close-run thing, but Studio Daniel Libeskind has won the competition

of his career, but he got there not through shameless self-puffery, as some

rival architects have been sniping in the press, but rather through a tireless

commitment to New York and its people. No matter what you think of the plan,

there’s no doubt that Libeskind’s heart is in the right place: everybody from

has been impressed by Libeskind’s dedication to genuine dialogue.

Even if the genuinely revolutionary plan was not, in the end, chosen, the process

by which Libeskind’s victory was achieved was exemplary, and will surely set

the standard for any kind of major urban planning commission, anywhere in the

world, for the foreseeable future. The Port Authority of New York and New Jersey,

decisions, ended up being an integral part of the most genuinely consultative

and democratic architectural process any major city has ever seen. Given the

very high standard of many of the shortlisted

plans, I think that the ultimate reason that Libeskind won was that he was

most attuned to the process, and most willing to present his ideas as a work

in progress, something which could and should reflect the views of all the stakeholders

in the site, and not just his own ego.

As Lou Tomson, the president of the Lower Manhattan Development Corporation,

said during the announcement ceremony today, the plan was "born out of

tragedy but forged in democracy". The LMDC painstakingly sifted through

tens of thousands of comments from members of the public, not in lip service

to the ideal of public consultation, but as a necessary part of the process

for deciding what would ultimately happen on the WTC site. New Yorkers now have

ownership of the winning plan, which was definitely one of the most popular.

to me, an Englishman who well remembers the furor over his proposed addition

to the Victoria & Albert museum in London. But, of course, this is different:

Libeskind is not destroying anything that anybody loves, and bold new buildings

have much more of a place in New York than they do in London. As mayor Michael

Bloomberg noted today, the construction of Libeskind’s spire will mark the tenth

What’s more, the Libeskind plan is one which repays careful attention to detail

– something New Yorkers have been giving all of the proposed designs.

Look at the way, for instance, in which he neither buried West Street nor allowed

it to interfere with the memorial setting on which it borders: by bringing the

memorial down 30 feet below grade, the cars on the highway are both out of sight

and out of earshot to those in the memorial zone.

Libeskind also understood something which was lost on Norman Foster: that this

– something that would probably never be built. Libeskind, on the other

hand, concentrated on site use, articulating a powerful area for a memorial

The center of his plan – and the new epicenter of Lower Manhattan, once

the plan is realised – is the crossroads of those two streets. It will

be one a great public space, ranking alongside St Mark’s in Venice, rather than

World Trade Center of old. John Whitehead, the LMDC chairman, called it "one

of the world’s most majestic crossroads," and the Wedge of Light, to its

northeast, "a 21st Century piazza for New York City and the world".

Opposite the Wedge of Light, to the southwest, will be the memorial museum and

the Park of Heroes: something Libeskind has glossed in his plan as green space,

with. To the northwest will be a gleaming new cultural center, with a 2,200-seat

auditorium, abutting the great 1,776-foot spire. To the northeast will be a

hotel and convention center, while to the southeast will be a grand new transit

hub, which will eventually link lower Manhattan directly to airports to the

The transit hub will be a Grand Central Terminal for the 21st Century: filled

with light, even well below ground. The low ground level of the memorial will

help immeasurably here, as will Libeskind’s ingenious idea of building the memorial’s

play a central role in the memorial, but it will also act as an illumination

for commuters on the other side. (To the south side of the memorial zone will

be a second wall, this time opaque, which will also be part of the memorial

competition. And the western wall will be the great slurry walls of the original

the Hudson River from flooding Ground Zero. Part of them will be excavated to 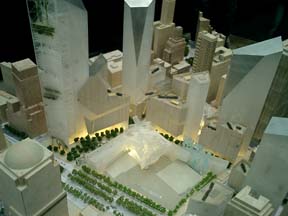 plan is centered on the memorial square. The photo at left, looking northeast

from more or less the Wall Street Journal offices in the World Financial Center,

is of the new model, and shows the memorial museum cantilevered over the "memory

foundations", as Libeskind calls them. A series of skyscrapers spirals

up from the foundations, up the ramp which descends parallel to West Street

(the big road nearest us) and around the south, east and north edges of the

site to culminate in the large spire holding the "gardens of the world".

deck, but the memorial and the museum are down at ground level, where no one

needs to worry about being high up in the sky. Libeskind said he was aiming

Most of the skyscrapers, it’s worth noting, are not going to be designed by

Daniel Libeskind. And since the lower floors of the signature tower are going

to have some tenants, there could be a lot of changes made from how the buildings

are envisaged right now. "It is now our task to make sure that the plan

– but of course this plan is not exactly what will be built.

– the memorial site and museum, the cultural center, the transit hub,

and the restored skyline. Personally, I believe all of it except for the skyline:

of the tallest building in the world.

I don’t see the federal government stepping in to help, either: the representative

of the president today was a minor functionary called Alfonso Jackson, the deputy

secretary at the Department of Housing and Urban Development. He gave a horribly

tone-deaf speech, wherein he basically tried to claim credit for everything,

the war on Iraq and Bush’s proposed tax cut. It’s clear that the White House

doesn’t really care about New York, and that the city and state – both

site. With the best will in the world, I don’t think they’ll quite manage the

skyscraper within four years, although I hope I’m wrong.

But even without the skyscraper, I’m heartened that New York now has a vision

for rebuilding which is both bold and popular. Not everyone will like it, of

course: there isn’t a major new building in the world that someone doesn’t hate.

But this site is going to be a powerful destination, and I predict that it will,

finally, be responsible for turning lower Manhattan into a vibrant residential

neighborhood. People are really going to want to live here!

Finally, a word about the decision. I have to admit I am a little disappointed:

I wanted the Think plan

to win. Where Libeskind is 1990s avant-garde, Think was genuinely futuristic,

with a vision of a vertical city which had never been attempted anywhere before.

But it was watered down over the past couple of weeks, with fewer buildings

inside the latticework towers, and the memorial museum lowered to the 30th floor

or so rather than being up in the 80s. The latticework was also made lighter

and cheaper, which would have meant it would have been much more difficult to

build new cultural elements as and when the funding for them became available.

In short, it was not entirely clear that the Think plan would really work, and

the sort of thing which can be embarked upon with less than 100% certainty.

So I’m happy for Daniel Liebeskind, happy for New York, and happy indeed for

Rafael Vinoly and the other members of the Think team, who have surely got as

got from a finished building anywhere else. I can’t wait to see this plan become