I went to the unveiling of the new plans

for the World Trade Center site this morning, and they’re miles ahead from the

vague and unimaginitive plans we saw

five months ago. There are nine plans in total, from seven architectural teams,

and between them they have a lot of excellent ideas.

There are some definite surprises, chief among them that the dream team of

Yorkers all – should have come up with the worst design of the lot. SOM,

as well, the most experienced skyscraper-builders in the world, fell flat on

A notch up in quality are the teams who had some but not all of what was needed.

a very workable but completely unimaginative design. The team calling itself

Think had no fewer than three ideas, all of which are quite clever, but none

of which stand up to much scrutiny. And Norman Foster, although he does have

a wonderful skyscraper, has little else.

The best designs came from Daniel Liebeskind, who stunned with a coherent,

realistic and highly imaginative plan; and United Architects, with an idea which

reimagines just what urban design can be all about.

The one thing which everybody did, however, was present skyscrapers as public

spaces. Something’s going to go up on the site, and whatever it

is will have much more public access than any other tall building in the world.

At the risk of getting blogged down, so to speak, I’m going to run through

each in turn, since I think it’s important to point out the bad things as well 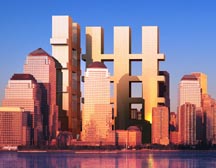 et al first, then. Richard Meier was very cocky in his presentation:

"We’re the New York team," he said. "Some say we’re the dream

team." But what this team came up with looks like a classic case of design

by committee. They put reflecting pools on the footprints of the twin towers,

which let light through to a memorial space below – so far, so normal.

11, and planted them with trees. One of the shadows went into the river, so

that area becomes a "floating memorial plaza" which 5000 people can

fit onto should they so desire. It’s one of dozens of different memorials which

they’re dotting around Lower Manhattan, in a kind of distributed remembrance which I don’t think really works. You don’t want to keep on bumping unexpectedly into another memorial as you go about your daily life.

The main problem with the design is the skyscraper portion, however. The Lower

all the competing architects that "a restored skyline will provide a significant,

identifiable symbol for the residents of the metropolitan area". Well,

right angles to each other. Peter Eisenman tried to liken the buildings to "the

fingers of two hands embracing the site," but they aren’t. Rather, they

block off the site (and Battery Park City) from the rest of Manhattan, reading

more as barriers than as entry gates. 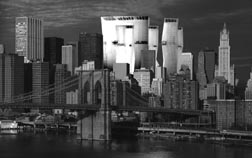 Skidmore Owings & Merrill, who teamed up with four artists,

including Jessica Stockholder, to create what they call "a dense grid of

skyscrapers shoehorned into a very small area, with the occasional sky bridge

connecting one to another. They all have sky gardens on the top, which is nice,

but no matter how airy they are, street level will become dark and permanently

in shadow, and it’s not going to be a nice place to be.

through it in glass tubes. The whole presentation, in fact, feels much more

like the conceptual projects we all saw in the immediate aftermath of the disaster,

and far from anything which could ever be constructed in reality. 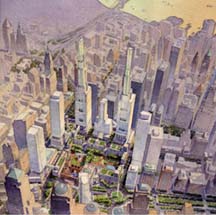 Design. It’s a small partnership which impressed the LMDC with its

approach to the site and somehow made it, as architects, to the final round.

It’s one of the few teams to break the rules: while the LMDC said that it didn’t

want to build on the footprints of the original towers, Peterson/Littenberg

put an amphitheatre in one of them.

a tree-lined promenade which stretches all the way down to the Battery. It’s

a great idea, and one which the LMDC has adopted, but it was specifically exluded

from this particular brief. Again, Peterson and Littenberg ignored the brief.

As urban planners, rather than architects, this pair spent a lot of time designing

a lovely garden, and constructing a pedestrian-friendly street grid. They’re

Center site, but also added a brand new street as well. The final plan is certainly

a nice place to be, but it shows very little in the way of boldness or imagination.

And the new skyscrapers aren’t imagined at all, beyond the fact that their height

building). Two of them will have 35-storey campaniles on top (one a hotel, the

other residential); these will serve to replace the lost elements of the New

something that is at the forefront of the other schemes. 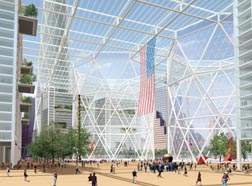 David Rockwell, couldn’t come to any decisions at all, and instead presented

mid-air, with various buildings huddled in the darkness below. The last, called

the World Cultural Center, is a crazy idea to build a latticework around the

footprints of the original towers, and then slap various cultural institutions

(schools, theatres, whatever) inside the latticework at various different

heights. At the exact points in midair where the planes flew in to the World

Trade Center would be a memorial linking the two structures. Whatever. This

is a flight of fancy, it could never happen.

Think also proposed what they call a Great Room, which basically comprises

enclosing most of the site in a huge 30-storey glass plaza. The roof would be

held up by office buildings around the perimeter, as well as by another pair

of latticework columns surrounding the footprints. Next door to the site, where

the Deutsche Bank building currently sits empty, the tallest building in the

world would be constructed to help out on the skyline front. The whole thing

is less bad than the other two ideas, but I’m not sure there would be too much

demand for offices which front straight on to a memorial, or even for any new

structure of this magnitude. 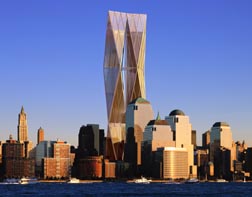 and Partners is definitely an improvement on the previous four. Lord

(Norman) Foster knows his onions when it comes to monumental architecture, and

he’s designed a beautiful twisting "twinned tower" which would be

a welcome addition to any city’s skyline. He calls it "the most secure,

the greenest and the tallest in the world," and there’s no reason not to

believe him. It will be filled with high tree-filled public atriums at various

levels, which will provide stunning views over the rest of the site as well

as far beyond. There could even be funiculars sweeping us all up the side of

the building at high speed – what an attraction, and not just for tourists.

Foster has kept the footprints as voids, and placed high walls around them

to set them apart and intensify the memorial experience. You can’t go into them,

but you can go around them, and then up a ramp into a huge green park which

stretches over the top of West Street and all the way to the river. (In this

way, Foster avoids the huge expense of burying West Street, freeing up those

funds for other transportation or infrastructure projects.) 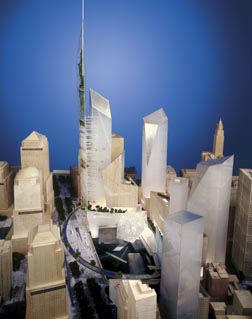 keeps Foster out of the top two, however, is a certain lack of imagination.

His plan is workable, and strong, but it’s not really bold. Daniel Liebeskind,

however, has a wonderful central idea (you can read his statement here)

which he’s managed to turn into a compelling architectural concept.

It all starts down in the dirt, by the huge slurry walls which stop the Hudson

River from rushing in to the site. These were and are true engineering marvels:

as Liebeskind says, they "withstood the unimaginable trauma of the destuction

and stand eloquent". He keeps them exposed, 70 feet below ground, and then

spirals up and out, into the rest of the site and beyond.

At the bottom is the museum and the memorial; at the top is a vertical "gardens

of the world", rising in a glorious spike well above the rest of the skyline.

The buildings in the rest of the site are extremely strong as well, especially

of light". This is a triangular plaza which will have no shadows each year

Heroes Park, one of three or four green spaces in the plan. Finally, symmetrically

opposite the gardens of the world is the transit hub, a center not only for

PATH and subway trains, but also the point to which the "paths of heroes"

converge. Everything, down to the parking area for tourist buses, has been carefully

thought out and put in what feels like exactly the right place. 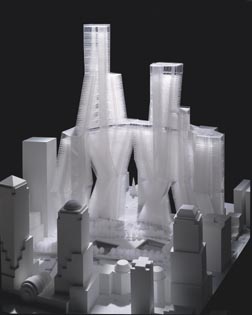 in the competition, and come up with a very strong, simple and new idea.

United Architects, just like Liebeskind, go down to bedrock and build vertical

sacrosanct areas around the edge of the footprints. Looking up from the bottom

of their voids, however, one sees not just sky but skyscrapers too: "the

memorial and the development are not divided, but linked," in the words

of Greg Lynn. The effect is a cathedral-like space, where the buildings carve

out a volume of light.

One enters the space walking down a sprial from Greenwich Street, passing various

cultural institutions on the way; to go back up, there are elevators back to

ground level and higher still, up the sides of the new buildings.

There are five of them altogether, each at least 65 stories tall, and each

touching on the next at least once. At street level, there will be huge gaps

between the buildings, maintaining street grids and view corridors. But 60 stories

up in the air, they converge onto a minimum of five stories of contiguous space:

The buildings would all be self-standing, and could be designed by different

architects, within the basic constraints of the overall plan. But they would

all support each other, too, both architecturally and structurally, creating

an incredibly strong and safe set of skyscrapers. They would have 29 exiting

cores between them, all accessible from any building, and 43 areas of refuge,

combining to create thousands of different exit routes. The tallest of the buildings,

at 1,620 feet, would be the tallest in the world, but would also be much safer

than the twin towers were. (Liebeskind’s tallest tower, by comparison, is a

more symbolic 1,776 feet. Its top, however, is filled with plants rather than

The way the five towers link to each other would create, in the words of the

architects, "a new symbol of unity and interdependence"; it would

also be a very impressive addition to the skyline.

Of all the plans, it seems to me that the last two are easily the best. It’s

hard to choose between them: they’re both bold and exhilarating, but in different

limn a whole new way of living, based as much in the air as on the ground. Of

course, neither of these two visions is going to make it into reality: there

will be committees and compromises and revisions galore before anything even

starts getting built. And a lot of them will be for the better. But at least

now, unlike five months ago, I can hope that what we will end up with at Ground

Zero will be a truly wonderful piece of first-rate architecture, something the

rest of the world will envy us for generations to come. Those who died on September

11 would want nothing less, for us and for them.

15 Responses to The new WTC designs